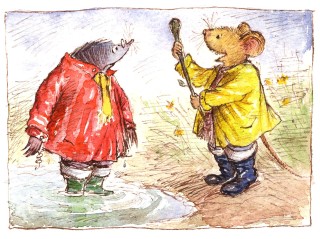 James Mayhew is an internationally famous illustrator of children’s books who lives in Letchworth Garden City in Hertfordshire. I first met him in the early 1990’s when my son was small. We’d gone to visit Hitchin Library and James had just finished a session with a group of children. As I recall Baba Yaga was being given an outing on that occasion. I’d liked his work when I first saw it in ‘Five Mice and the Moon’ so I was very pleased to meet the artist. In some ways these pictures, for me, pre-figured Mice and Mole who I always thought were delightful. These two were eventually animated for television and given voice by Alan Bennett and Richard Briers, which seemed just right somehow.

I was very lucky because I was later to work with James on other children’s events in libraries and elsewhere. One of his party tricks is to tell a story and draw an image upside down. It was fascinating to watch and my particular favourite was when he did the Firebird. Of course he has gone on to much more famous venues since including the Edinburgh Festival.

James draws beautifully and his pictures remind me of the work of book illustrators’ in the 1950s and 60s. I remember being shown some of his early illustrations for the book of Shakespeare stories and they were exquisite. Sadly, however good a published piece of artwork is, it never quite captures the original, especially the translucency of watercolours. As well as working on a small scale he is capable of much larger things. His house in Baldock was like entering one of his drawings with beautifully painted and decorated furniture and walls. His love of old records was also much in evidence with a huge old gramophone sat in the corner.

Unfortunately I don’t have the opportunity to work with him anymore but I always enjoy seeing his work in books.  As well as being in demand all over the country he still works in Hertfordshire. For most people the next chance to see him will be at a concert with the de Havilland Philharmonic arranged by the University of Hertfordshire and the St Albans Children’s Book Group.  This Big Draw linked event on the 8th November promises spooky tunes and spine tingling stories as well as the chance to win one of James’ paintings.

Many children in Hertfordshire will also have met him at their schools and had chance to enjoy his storytelling and drawing. There are several websites with lots more information about him. So if you want to find out more about a modest but highly talented author/illustrator whose work has been enjoyed by children (and their parents) all over the world then you might want to look at these websites   http://biography.jrank.org/pages/308/Mayhew-James-John-1964.html