An engraver from Ayot St Peter 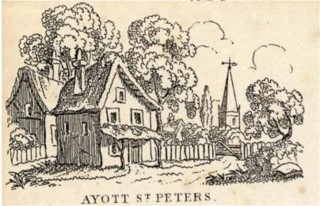 This drawing was made by John Kilby Green, a London engraver who worked in the toy theatre business in the first half of the 19th century. The picture seems rather fanciful, but presumably shows the second Ayot church that was demolished in 1862.

John Kilby Green was christened on 2nd May 1790 at Saint Peter’s church in Ayot. He was the son of James and Sarah Green. In 1804, at the age of 14, he was apprenticed to Mr Simkins of Denmark Court, near the Strand and entered into the printing business. JK Green’s career as an engraver spanned more than fifty years and he spent the vast majority of this time in the “Juvenile Drama” industry. During this period he saw both the growth and decline in popularity of the toy theatre. John Kilby Green died on 29th February 1860 aged 70 at 29 Thurlow Place, Walworth, Southwark.

The drawing and information were taken from an online book that can be found at www.toytheatre.net/JKG-History-2.htm