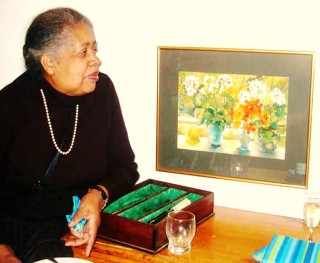 The artist Myrtle Desmond Blair came to England in 1963 with her husband Thomas L Blair, Professor of Sociology and Urban Planning at the Polytechnic of Central London (now University of Westminster). Moving to No. 42 West Street, Hertford, England in 1973, she gained prominence as a professional artist and generous supporter of artistic, educational and popular causes.

Mrs. Blair, born March 9th 1927, grew up in an old New England African American family in Greenwich, Connecticut. Her talents and passion for social equality gained her entry to the prestigious Vesper George School of Art in Boston. Later, at New York’s Art Students’ League, where all young aspiring artists congregated, she studied with Reginald Marsh, artist-illustrator and icon of the “ash can” school”.

Myrtle’s contributions to African American and African fine arts and media are extensive due largely to her travels with her husband. In the 1950s, she introduced students to the Fine Arts at Jarvis Christian College, Hawkins, Texas, where Thom Blair taught sociology, anthropology and psychology. She lectured in the fledgling art department at Ahmadu Bello University, Zaria, northern Nigeria, in the early 1960’s, whilst Thom was researching the modernising city of Kano in the early years of independence from Great Britain.

Then, in post-colonial Algeria, she designed development posters for government agencies. Working on her own with her children Lucille, Katharine and Gage, while Thom was writing about the Algerian revolution, she captured the spirit of the times. One poster she is especially proud of depicted the liberated population, young and old, marching joyfully towards a new age of literacy for all, writes Eve Sangster.

Mrs. Blair’s art work progressed in West Street, Hertford, where her fourth daughter Ellen was born. It blended naturally with her stewardship of the environment with the West Street Residents Association.  Many recall her exhibitions at the Hertford Museum and the Hertford Art Society in the 1980s. She also added children’s book illustrations, Christmas cards and life studies to her portfolio. In her most productive years, from 1980 to 1995, Myrtle gained awards and patrons for her flower paintings and watercolours of West Street’s hidden gardens.

Latterly, she has enjoyed the friendship of fellow artists and water colourists Trevor Chamberlain and Julie Harrison. In addition, her creative interests are evident in her beloved   daughters as well as her grandchildren, Katharine’s Sam, Lottie and Indigo, Lucille’s Liam, and Gage’s Max.