On Sunday 1 August 1914, 56 year old Englishman Edward Theobald hurried from his accommodation in Rixheim, a suburb of Mulhouse (then known as Mülhausen) in Alsace, which was part of the German Empire. He had just cut short an extended business trip and was toting a heavy trunk. Edward had been monitoring the worsening political situation in Europe for several days, during which time letters to England were returned to us, no telegrams were permitted, and the local telephone was disconnected. By Sunday he had resolved to leave. If he’d delayed, he might have found himself in the middle of one of the first engagements on the Western Front: the Battle of Mulhouse.

Edward lived in Nascot Wood, Watford, and was a prominent member of the West Herts Golf club, becoming its captain in 1919. In 1914  he donated a cup known as the Mixed Foursomes Trophy, which is still competed for by club members to this day. For many years he had carried on a successful business as importer of high-end wallpapers and textiles, which he sold in his elegant shop premises in Fitzrovia, London. He was the UK agent for the well-known luxury wallpaper manufacturer, Zuber & Cie, who were based in Rixheim, and in August 1914 was paying them one of his regular visits, probably to view new designs to add to his stock.

Edward later told the West Herts & Watford Observer that by the morning of Sunday 1 August the German authorities had destroyed the railway line from Mulhouse to the French border, correctly expecting an impending attack from French forces. He realised that his most direct path home was now blocked and he needed to find a plan B, or risk being trapped in a war zone.

The resourceful Edward rapidly worked out that he could avoid the German-French border by instead heading further south to Basel in Switzerland and catching a train back into France from there. But the German train lines to Basel were also out of action, so his only option was to set out on foot – no easy task, considering the heavy trunk he had to haul with him. This was the standard item of luggage of the period: built to withstand any amount of rough treatment and weighing a ton, even when empty. Edward’s trunk – and his stomach – became recurring themes in the drama of his journey. 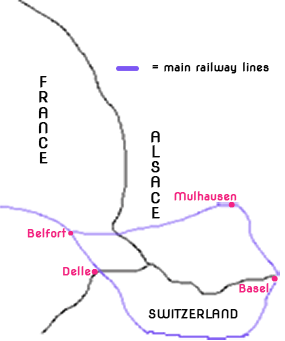 Luckily he managed to hitch a ride on a goods lorry heading for the border, in the company of several other Switzerland-bound refugees. Edward’s relief at arriving in Basel was short-lived however, when he discovered that normal rail services had been suspended. Nevertheless, several hours later he succeeded in getting himself onto a train – only to be disappointed when it terminated 40 km short of the French border at Delémont, capital of the Swiss Jura. It was now 8 p.m. on Sunday evening and after a day’s exhausting travel he seemed to be no nearer home.

Switzerland was neutral in the coming conflict, but their land force of more than 200,000 men was now mostly converging on the Jura border with France – and passing through Delémont station. The chances of catching a train appeared to be getting slimmer and slimmer. Edward got into conversation with a young Frenchman, also bound for Paris and, as they watched countless troop trains leave the station without them, they did the only sensible thing in the circumstances: they repaired to a local restaurant. This was ‘the last comfortable meal I had’ remarked Edward, who sounds like he might have been something of a bon vivant!

Replete with good wine and fine Swiss cuisine, they eventually boarded a train at 11 p.m., now joined by a mysterious but determined French lady. Englishman Edward was clearly smitten by her ‘French “go” and vivacity’, as he put it. At midnight their train got as far as Boncourt in Switzerland but would go no further. They were still a tantalizing kilometre short of Delle, just over the frontier in France, where a Paris-bound train might be caught. Sadly there was no such thing as a replacement bus service and, once more, the only option was to set out on foot.  It was at this point that it began to pour with rain! 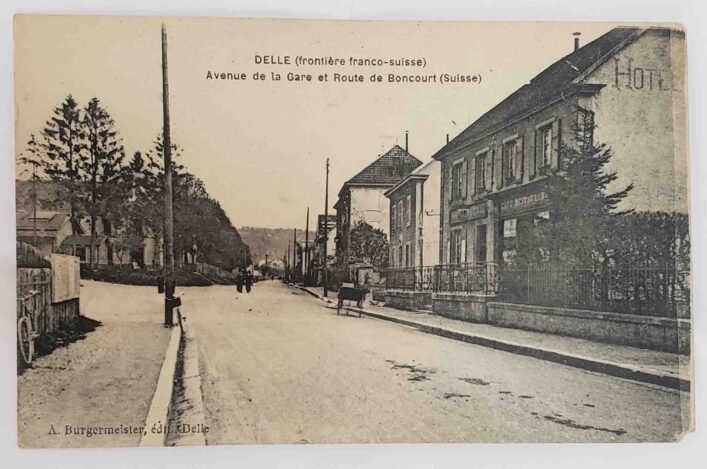 Edward and friends arrived at Delle railway station, foot-sore, soaked and exhausted, and they prepared to await the next available train. The station was a hubbub of good-natured French troops who were delighted to discover Edward was English and quizzed him on Britain’s likely role in the coming war. Poignantly, Edward reported that the French soldiers weren’t at all downhearted by the rotten weather and, full of confidence about the prospects of a swift victory over Germany, broke into rousing choruses of the Marseillaise.

Trunk to the rescue

After several hours the sleep-deprived trio eventually got themselves onto a troop train at 5 a.m. on Monday and, four hours and several changes later, they arrived at Besançon, about 100 km further west. Hopes of breakfasting were dashed when they struggled through the crowds of refugees and soldiers in Besançon station, only to discover that the buffet had been stripped of food. Fortunately, Edward’s trunk now came into its own because, as ‘an old hand’ at business travel, he always kept enough food in it for emergencies like this, and he now shared what he had with his grateful companions. 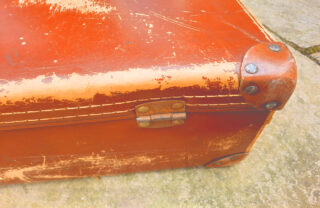 It had to sustain them for the rest of Monday as they crawled towards Paris on packed trains, which stopped at every station to pick up army reservists. They finally arrived at the Gare de Lyon, in Paris, at 2 a.m. on Tuesday. Later, Edward recalled his enduring memories of the journey: the sleepy, picturesque stations they’d passed through, the French soldiers taking tearful leave of their families on crowded platforms, and more patriotic singing.

In Paris the little band of travellers prepared to go their separate ways. Intriguingly, the young Frenchman was evidently not immune to his female compatriot’s ‘go and vivacity’ either, because he gallantly offered to see her safely to a friend’s house in the capital. A lonely Edward had to hang around for a further three hours before he managed to get a taxi to the Gare du Nord. There he was finally forced to jettison his other faithful travelling companion – his trunk –  in order to catch a 10 a.m. train for Boulogne that only allowed hand luggage. He managed to salvage a few of his belongings, wrapped in brown paper.

A bit like the end of any trip, the last leg seemed to take forever. The train was agonisingly slow, arriving at Boulogne only just in time for Edward to catch the return steamer to Folkstone at midnight on Tuesday. Edward ended his journey in Watford at around 7 a.m. on Wednesday 4 August – the day Britain declared war on Germany. He had been in transit for three days, with barely anything to eat and virtually no sleep. Much like commuting ‘on the South-Eastern’, he quipped. Well, as the French say, plus ça change!

Edward survived the First World War, dying at his home in Watford at the age of 70 in 1929. But we are left to wonder what became of his two French travelling companions or, indeed, his trunk.


Hertfordshire Names Online is a wonderful facility that allows you to search for named individuals in HALS collections.

Rough schematic plan of the railway network around the Alsace/France/Switzerland borders c. 1914, produced by author – and not to scale!

Photo of suitcase by author.