You are here: Home>Herts history>People>Boudicca and her daughters, 30- 61 AD; the Terrorist – or freedom fighter?

Boudicca and her daughters, 30- 61 AD; the Terrorist – or freedom fighter? 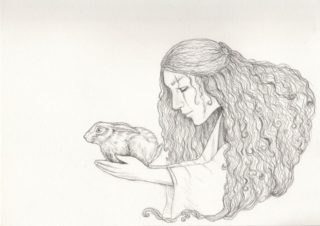 Queen of the Iceni, beaten by the Romans, her young daughters raped, she summoned and organised her army to take revenge on the Romans by sacking Verulamium.

Boudicca was married to Prasutagus, ruler of the Iceni people of East Anglia. When the Romans conquered southern England in AD 43, they allowed Prasutagus to continue to rule. However, when Prasutagus died the Romans decided to rule the Iceni directly and confiscated the property of the leading tribesmen. They are also said to have stripped and flogged Boudicca and raped her daughters.
In 60 or 61 AD, while the Roman governor Gaius Suetonius Paullinus was leading a campaign in North Wales, the Iceni rebelled. Members of other tribes joined them.

Boudicca’s warriors successfully defeated the Roman Ninth Legion and destroyed the capital of Roman Britain, then at Colchester. They went on to destroy London and Verulamium (St Albans). Thousands were killed. Finally, Boudicca was defeated by a Roman army led by Paulinus. Many Britons were killed and Boudicca is thought to have poisoned herself to avoid capture. The site of the battle, and of Boudicca’s death, are unknown…

What was said about her:

“She was very tall, the glance of her eye most fierce; her voice harsh. A great mass of the reddest hair fell down to her hips. Her appearance was terrifying.” Roman scribe, Dio Cassius

Boudica and her daughters drove round in her chariot to all her tribes before the battle, exhorting them to be brave. She cried that she was descended from mighty men but she was fighting as an ordinary person for her lost freedom, her bruised body and outraged daughters. Perhaps as taunt to the men in her ranks, it is said that she asked them to consider: ‘Win the battle or perish: that is what I, a woman will do; you men can live on in slavery if that’s what you want.’

Boudicca’s name has been used in many ways:

This, from a leading cruise ship line: ‘Boudicca was the heroic warrior queen of the British Iceni tribe. And we like to think our truly British, world class cruise ship lives up to the name. Up to 880 people can enjoy a cruise on board Boudicca -so there’s plenty of space for everyone. Indulge yourself…. Lounge around on the Lounge Deck, or in one of our two Jacuzzis. Or splash around in one of our three pools. And when the sun’s shining, our tasty poolside buffet will hit the spot. You’ll have days and nights to remember on board Boudicca.’

And this, from a fashion house:
‘Named after a formidable queen of ancient Britain who led a revolt against the Roman army two thousand years ago, the Boudicca label of latter-day London defies the fashion powers-that-be with equal tenacity and aplomb, wielding weapons of ideology and tailoring in their fight against conformity. Here, the duo behind the cutting-edge women’s fashion line open up about their motivations, including a passion for film, a distaste for the English press, the top secret launch of a perfume that isn’t, and, above all, the importance of being independent.’

And the ultimate indignity:
‘The hunt is on to find Boudicca. The grave of this warrior queen, who fought the Romans to defend Britain, is unknown – although it is thought that her bones lay near what is now a McDonald’s in Birmingham. Another theory suggests that the flame-haired leader of the Iceni lies beneath either platform eight, nine or 10 at King’s Cross Station.
What was she REALLY like?