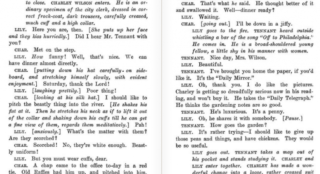 She earned her living primarily as a typist, and was a spinster until the age of 39 when she married James Allaway, a widower, in June 1915.

By then, she had already written several plays. Baker lived in the west London suburb of Bedford Park, and the constrained lives of the lower middle-class clerical classes was the subject of her first performed play Chains. She also wrote The Price of Thomas Cook, Miss Tassey (1910) and Miss Robinson (1918).

Like other members of the lower middle class intelligentsia, Baker was a lover of books and the theatre, as well as being a vegetarian and a strict teetotaller.

After the end of the Great War, she took off with her husband to the Pacific Ocean, living in Rarotonga in the Cook Islands for two years. They followed this up with a year’s stay in San Francisco and another year in New York.

After the death of Allaway in 1941, Baker moved to Bishop’s Stortford in Hertfordshire where she lived with her stepsister in genteel penury. Her luck changed a few years before her death when ITV televised two of her plays – Chains was produced as Ticket for Tomorrow in November 1959, and Miss Robinson as Private and Confidential in May 1960. The royalties from these eased her financial situation considerably.

Baker was reintroduced to a British audience when Chains was staged for the first time in nearly a century by the Orange Tree Theatre in November 2007.