The Lord Protector in Cheshunt 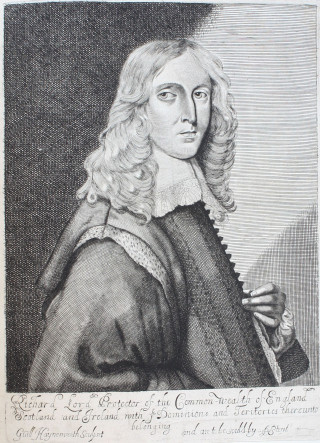 Although very much in the shadow of his great father, Richard Cromwell held the title of Lord Protector of England for a brief period in 1658-1659.

The eldest surviving son of Oliver, he was born in1626 in Huntingdon.  He had an undistinguished early life, although it’s known that he became a member of Lincoln’s Inn in 1647, and may have served as a captain under Sir Thomas Fairfax, although he’s not known to have fought in the Civil Wars.

In the 1650s, Richard served as a member of parliament, and on his father’s death, on the 3rd September 1658 , he was proclaimed Lord Protector in succession.  His position was largely untenable from the start; even his father had difficulty keeping the Commonwealth together, and Richard had neither political nor military experience, not was he a forceful character.  After clashes with both Parliament and the Army, he finally resigned on 25th May 1659 , going into exile the following year.

About twenty years later, Richard Cromwell returned quietly to England and took up residence at Parsonage House in Churchgate, Cheshunt, the home of his friend Baron Pengelly (Pengelly House, often cited as his residence, was actually not built till the 18th century, after Cromwell’s death).  This was less than a mile from the site of Theobalds Palace , from which Charles I had ridden north to raise his standard in 1642, setting in motion the Civil War which had raised Richard Cromwell briefly to be ruler of the country.

He commonly used the pseudonym Richard Clarke, although he appeared to have no urgent reason to hide his identity, rather preferring not to be the object of interest and scrutiny.  A story tells of how, on a visit to London , he took a stroll through Westminster Hall and came to the House of Lords.  Asked by a fellow-visitor whether he’d ever been in the Chamber before, Cromwell pointed to the throne and said, “Never, since I sate in that Chair.”

He divided his time between Cheshunt and his wife’s estate at Hursley, Hampshire, where he was buried after his death in 1712.

Opinions about Richard Cromwell have varied widely.  Many historians have characterised him, in the words of John Richard Green, as “a weak and worthless man,” and he was satirised as Queen Dick and Tumble-down Dick.  On the other hand, Guizot points out that “He had little desire to hold superior rank, but did not shrink from it when offered to him.”  John Ashton describes him in later life: “He was of a very genial, kindly disposition, and even in his old age he was full of innocent pleasantry.”

Richard Cromwell was born as the son of an obscure country gentleman.  He rose, without his own effort and somewhat against his will, to be styled “The Noble and Illustrious Lord Richard, Protector of the Commonwealth of England , Scotland and Ireland , and Territories thereunto belonging.”  He was buried as “Richard Cromwell, Esquire.”