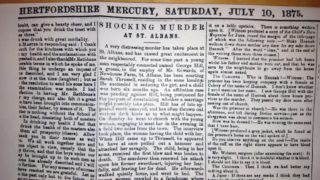 The crime as reported in the Hertfordshire Mercury 10th July 1875 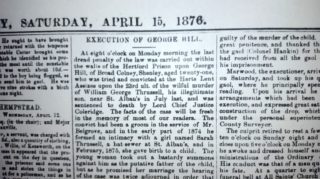 On the morning of 4 July 1875, William George Hill was baptized by his mother, Sarah Thrussell, at St. Peters Church in St. Albans, near to where she lived.  William is shown in the baptism records as illegitimate, but his father George Hill, a groom from Broad Colney, had offered to marry Sarah and care for her and the baby.  By the end of that day, however, the baby would be dead, Sarah lucky to escape with her life, and George arrested for murder.

The headline for the article in the following weekend’s Hertfordshire Mercury read ‘Shocking Murder at St. Albans’ and gave full details of the crime as given by witnesses, including Thrussell herself, to the coroner.[1]  Hill had arranged to meet Sarah and the baby on 4th July under the pretext of showing them the house he had rented for them all once they had got married.  There is no record of him attending the Christening or if he even knew that William had been baptised, but he stressed that the baby should be brought to see the house regardless of the weather.  The couple walked into the fields of New House Farm and having avoided passers-by, Hill took Sarah and William into a wheat field and there attacked her with a hammer he had hidden on himself.  Once she was incapacitated, Hill attacked the baby with the hammer, killing him and leaving Sarah for dead.  Despite this, she somehow managed to reach the farm house to get help and Hill was swiftly arrested.

Hill was sent to Hertford Prison, at that time situated on Ware Road, to await trial, but having to wait for the next assizes meant that he was held for eight months before his trial began. This was the first of several controversies surrounding the case and led to a question being asked by the Liberal peer Lord Cowper in the House of Lords.[1]  This would eventually lead to a change of  government policy regarding waiting times for trials.  When the trial took place, Hill claimed insanity as his defence, but it was reported by the Mercury that the presiding judge, Lord Chief Justice Coleridge (one of the most senior in England), had instructed the jury to ignore any claims of insanity before the trial started. Further controversy arose after Hill was swiftly found guilty.  Interestingly, Coleridge did not don the black hat when passing the death sentence, nor finish with the traditional ‘may the Lord have mercy upon your soul’.[2]

During this period, it was common practice for friends and relatives to organise petitions to the Home Secretary and Prime Minister to try and save the condemned before sentence could be carried out. In his closing comments Coleridge gave the impression that the sentence would be lessened meaning that the usual petitions for clemency to the Home Secretary were left too late to save Hill from the gallows.[3]

On 10 April 1876, at the age of twenty-one, George Hill became the first person to be hanged in Hertford for thirty-seven years. Unlike the days of public execution when thousands could be expected to attend, a crowd of twenty or so officials and journalists watched him die in the courtyard of Hertford Prison. Though undoubtedly guilty of a horrible crime, the controversies surrounding Hill’s death have left unanswered questions. What role was played, if any, by his new girlfriend? Why did the judge discount insanity so quickly? Did the horrific nature of the crime mean that Hill was denied a fair trial? Whatever the answers, with the closure of the prison two years later, Hill became the last person to be executed in Hertford.