You are here: Home>Herts history>People>George Paul: A Life in Hertford>1. Walworth Road to Hertford 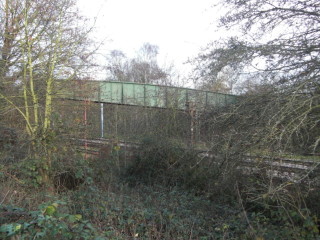 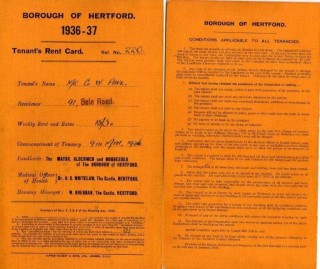 My first memory is as a four-year-old, riding on the back of my Brother’s small pedal car in Walworth Road, London. I was not allowed to sit in the front and Pedal, as my legs were too short.

Another  of my memories from that time was of running with the other youngsters behind the big Horse-drawn Ice Carts (No Fridges or Freezers in those days) and trying to quickly chip off some ice for a lolly to suck before some other rotten kid shouted out “LOOK BEHIND, GUV’NOR,” at which the driver would turn around and Crack his long Horse Whip at us. Many a time I was left with a red weal somewhere on my body, an act which to-day would probably earn him a Jail sentence!!

I also remember falling off a Swing in Kennington Park when my brother pushed me too hard, and being taken home bleeding from my Forehead, then Germolened and sent to bed. No X.Rays in those days, or Health and Safety, for that matter!!

I can also remember celebrating in Street parties, such as the Jubilee of King George the Fifth, and when he died, followed by the Coronation of George the Sixth, after the abdication of Edward the Eighth, the uncrowned King, and the Death shortly after of  the Queen Mary. When George the Sixth Died, (I was in the Air force at Leuchars, doing my National Service), and our now Queen Elizabeth II and her Consort, Prince Phillip, flew in on their way home to be crowned as Queen, I was  chosen to be in her Guard of Honour.

The only Ice Lollies in those days were sold from Tricycle Carts with an Ice box on the Front, and they were Called Wallzies, being made by Walls Ice Cream out of a fruit flavoured Water.

In 1936, The Envelope Factory Pimms, at  which my Father and Mother worked, Burned to the ground, and both Parents were out of work! In those troubled times, the 1930s, work was very difficult to find, but a Firm in Hertford owned by the family (Shand) bought the remaining equipment and stock, along with its order book, and moved it down to Hertford, and my Father was offered the Job as Planner/Cutter Foreman, the position he had held at Pimms before the Fire.

For some months, my Father travelled to Hertford to work, but because of the high cost of Train Fares, he sometimes used to Cycle part way, then take the Greenline Bus or Train the rest of the way, until at last he was offered a Council House at 91 Sele Road, Hertford, and In 1937 we all moved down to Hertford.

I was a south London Kid and not all that well behaved, but very soon converted to a Country Boy, learning things like climbing onto the Railway Bridge just up the Road from our House, and using the big Ship-type Rivets to climb up to the top, then running along the top for about 60 yards and  jumping down at the end. I have since been back to look at it again and  was horrified at what we used to do!!

From this Bridge, we were able to look down and watch Will Hay making a Film using a Railway Engine and getting washed off the Top by Water and falling down to the Platform below. I believe the Engine, the Silver Link, was also part of this film. This film was made at Hertford North Station and situated below the Bridge.

Scrumping and other country pursuits

I soon started learning to climb Trees around the area, sometimes even high enough to steal Crows’ Eggs, and after a few falls became quite adept at it. One of our favourite pastimes in late Summer was “Scrumping”, ie the stealing of other people’s Apples and Pears etc from the local Orchards. We all did it and risked a good Hiding if caught, but it was looked upon as a sport by all of us kids!

As I was growing up in Hertford, I learned many Country ways, such as making Catapults with quarter-inch elastic, and very soon was able to build my own first Bike from Pieces given and found around the area, wheels from one source, saddle from another, pedals from two different Bikes etc. The result was not a pretty sight, but it did work after a fashion, and soon it had a coat of light blue Paint found in Dad’s Shed.

Us Kids were often in trouble of some sort, and I can remember how we used to run and jump at the Privet Hedges in Sele Road  to see if we were able to go right over the top and into the Gardens. One of our favourite pastimes was to get an empty tin, prick it around the sides, then shred a piece of rope or string, or even Sacking, then put the resulting Fibre inside, light it and blow on the Holes, which made the tin light up like a small Bonfire and Glow in the dark, as well as keeping our Hands warm. Another favourite was Dicky White Show a Light or Whistle, where one hid say behind a Hedge or something and whistled, until the other Kids could find you, or Hear you, and then all over again.

NB, remember it was War Time, and not a Light was showing after Dark. All Windows had Blackout Curtains, and most carried 2-inch Crossed Sticky Tapes, which were there to hold in the Glass, in the case of Bombs falling, as the Shards of glass became flying Daggers and would kill or maim if they hit you. Most of the street lights were Gas and of the old type, with a bar coming out of the side (to support a ladder for service). We used to tie a Rope to the top of the lamp and use it as a swing to wind around the Stem and go round and round.

We also used to Buy a can of Carbide lumps,used in Cycle Lamps, from Wackets the Cycle shop, for when you dropped lumps into Water, it gave off a combustible Gas that you could light with a flame. With this Carbide, we often used to make Glass and Can Bombs to throw in the Rivers, and when they exploded, up would float all of the Fish, so that we could scoop out the big ones for the Pot. Those not used recovered and swam away.

During the War, none of the Street lights were lit, and most of them were not electric but Gas. This was called The Blackout, and the Air Raid Wardens would Patrol the Streets looking for lights showing, and If they were in your Premises, a stern warning would follow, with a fine if you were persistent.

The Local Warden’s concrete Nissen-type local Headquarters was on our  village green at the top of Sele Road Hill, and us Kids used to climb onto its top and use it as a slide, as it was just the right shape, having a curved design.