You are here: Home>Herts history>People>George Paul: A Life in Hertford>3. Wartime in Hertford 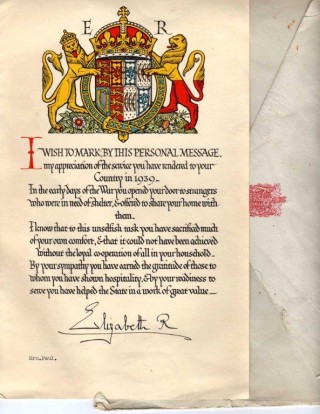 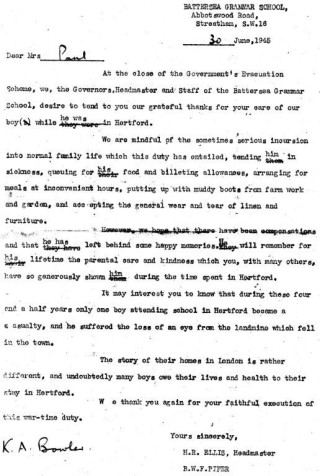 When War broke out, none of us Kids gave it much thought as we were too young to understand what had really happened.

At first  things were very quiet, except for the  reports in the newspapers and on the Wireless, and life went on as usual. It was a nice warm September, as I remember, and I was delighted when my Father said we were going to build an Air Raid Shelter in the back Garden. It was to be dug out of the ground, so that when finished it would look just like a First World War Bunker, with the top just below the surface. We all got involved as a Family in finding any pieces of Iron and Steel to put into its Cement Walls and Roof, and  mixing up Cement. The Walls were about Three Feet thick, nearly one Meter by metric measurement. Inside, it had two double-sized Bunks, one on top of the other, and two old Arm Chairs, a cupboard with Food and sweet supplies for one week, with Glass Bottles of drinking Water, tins of Corned Beef and Spam, with slab Chocolate. And, by the way it was built, it is probably still there to-day!!

Should the Air Raids London and other Cities were getting begin over Hertford, we would be about as safe as anyone could be against the Bombs – excluding, of course, a direct hit!!

Around about this time, my elder brother John/Jack joined the Royal Air Force and was posted to St Johns Wood in London,Near Regents Park, for Officer training. He passed with flying  colours and became a Pilot Officer, and was posted to Boundry Bay, Canada, for flying training as a Navigator Bomb Aimer. His  call to fame and high point there was going to a Night club over the Border in the States, to the Diamond Horseshoe Nightclub, and dancing with Betty Grable, the then top lady film Star.

As my Father was in the Fire Brigade, as a part-time Retained Fireman, he was often sent to London during the Blitz, with its Fire-Bomb Raids and Bombing, and he wanted us all to have somewhere that we would all be safe in his absence. Hence the Shelter!

I  remember my father bringing home a disarmed Incendiary Bomb one day that he had removed the firing fuse from, leaving only the Body made of Magnesium which, when you collected filings from it and put a match to them, used to flare up just like a Firework.

Very soon, the German Aircraft were overflying Hertford on their way to London and, if attacked by our Fighters, would just dump their Bombs anywhere, so that they could gain extra speed to get away from  the Fighters. Many fell around the area, but none on the Town, although we did have one Buzz Bomb “doodle Bug” V.1 that fell onto Rushes, the leather Shop on Mill Bridge, the shop where Jack my late brother’s Wife worked, and three Shops in all were wiped out, although there were no Casulties.

It was quite common to see Aerial Dog fights between our Fighters, mainly Spitfires and Hurricanes, with  the Germans above us, and  empty Cartridges and dead Bullets falling down around us. We did often get Aerial Land Mines and Incendiary Bombs all around, as well as High Explosive, and we were all warned never to pick any up the small ones, as they often misfired and would go off if disturbed. One of the biggest dangers we were all warned about was the anti-personal Butterfly Bombs. These opened two small wings that armed them on descent, so that if they were even touched after they landed, they would explode and kill or maim you!

On the odd occasion, crashing Aircraft would come down in local fields around about, some ours, but mostly theirs. On one occasion, we did have what is called an Oil Bomb drop into the North Road Cemetery, but I believe with little damage.

The Yanks are coming

One day, the Yanks arrived in Hertford, in preparation for the forthcoming D-Day invasion, and they were billeted in Houses at the bottom of Port Hill. Us Kids were always saying to them “Any Gum, Chum?” in an attempt to get them to give us some of their sticks of Chewing Gum, a sweet we were not familiar with, as it had not been sold in England before the War. The Yanks spent most of their leisure time trying to date the local Girls around Town, many with some success I could see, with sometimes Marriages taking place.

I do remember my elder Cousin Leslie one day turning up on our doorstep, having just come from Colchester Military Prison, having been sent there for falling asleep on guard duty shortly after his return from Dunkirk. After all of the stress of the rescue from the Beaches, with guard duty the next day when he got back to the Durham Light Infantry Barracks, no wonder he fell asleep.

One day, my Mother was taken ill and into the County Hospital for an operation, and we were taken to our aunt and uncle in Deptford, London. My Uncle was, by the way, the desk Sergeant at Deptford Police Station, and by this time the real Blitz had eased quite a bit, so it was not so bad, even though we had done the opposite of everyone else by evacuating the opposite way. However, we still used to retire to the Shelters every night, just to be safe. One morning, we returned back to Adolfus Street, to my Aunt’s home, only to find it had been nearly hit by a V1 Buzz Bomb, but it was still habitable  of sorts.

Two days later, my Mum and Dad came to fetch us, but they got on the wrong Tram at New Cross and changed at the next stop, only to see, just down the road, a V2 rocket go through the top of the Tram and into Woolworths, killing around 68 people all told.

In 1944, I was able to leave School just a little before I should have done and started looking for a job.