You are here: Home>Herts history>People>George Paul: A Life in Hertford>4. Starting Work 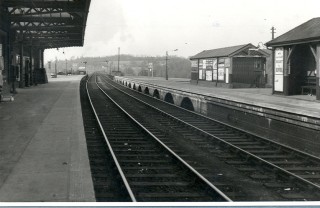 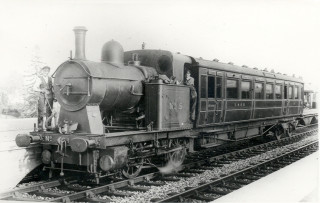 I was only 13 years of age when I started my first Job on the Railway and, as it was end of Term, I was allowed to leave the Cowper School and take the Job as a Lad Porter/signal boy, and hereby hangs another Tale………

I was 13 at the end of Term and therefore eligible to get a job. As there was a vacancy for a Lad Porter/Signal boy at Hertford North Station, so I applied and was taken on.

My duties involved jobs like sweeping Platforms, collecting Tickets and Bundling them up for return to the Depot at Sudbury, as well as handing over goods deliveries to Customers. This often meant some form of tip such as, in the case of Fish supplies, a Couple of Kippers or Herrings etc, and my Mum was always pleased when I brought something home.

Another of my Duties was to clean/polish and Trim all the Brass and Copper Signal Lamps on the Northern Section of line, and this meant walking once a week about 4 miles along the Tracks and climbing up the Signal Ladders, lifting the tops of the Lamps and changing them for refilled ones. It was quite normal when, upon opening the Lid above the Signal (to Change the Lamp), you would find inside a Birds nest of some sort. We were supposed to remove them, but I was too soft hearted to do that and used to try and arrange the nests so that they could not obscure the light from the signal.

On the Northern section, right at the end of my stretch, was the quarter-mile Tunnel at Waterford. This had no lighting inside and was pitch Black. I was always scared when I had to do this, as you could only walk on the wooden sleepers, and they were just over one leg-stride apart for me, so I spent most of the time stumbling along for a Quarter of a mile in the Pitch Darkness and scared out of my wits that someone/thing was going to jump out on me from the small safety cavities at the sides of the tunnel, which were there for people to slip into when and if a Train came through whilst you were in the Tunnel.

Please bear in mind I was only thirteen years of age, and this job I was doing was that of a man of at least twenty odd years, but all men of that age were away in the services. I remember I used to Whistle as loud as I could (a little wavery) as I walked through.

Another pastime was nicking from the Rail Huts some of the Explosive Fog Signals used on the Rails to signal a Train Coming in  the Fog when Gangers were working on the lines. These made great Bangers when you dropped a large Brick on them!! (I  was a bit of a Scamp in those days).

When the  usual London Scotland Line used to get Bombed, they used to route the Scotland Trains through Hertford North, and when this happened we had to pull over the points at Stapleford Station, a Ghost Station, so therefore we always had to have someone all day manning the Station. I was given so-called promotion and was handed with this Job, a big responsibility for a Fourteen-year-old Kid, but it was War Time. However, the Job  was so boring, and  apart from the emergency of pulling the Points etc there was nothing else to do all day long, so I used to go Rabbiting along the Railway Banks. When that also got boring, using a Catapult to shoot Railway cups from an old crippled Carriage to bits on the top of the old Carriages, and I very soon became a crack shot! (P.S. they were all cracked ones by the way).

I used to take with me every day some kind of Lunch prepared by my Mother, such as Shepherds Pie, to heat up on the Coke Stove for Lunch, or Sausages from Hugmans, the Butcher at Old Cross – The best in Town – and not Rationed!! And a Flask of Tea.

There Was a Farm using Italian Prisoners of War working the Fields alongside Stapleford Station, and they used to fashion all sorts of Trinkets, like Rings and Lighters etc, to sell for Pocket Money, and I made good friends with some of them and became the owner of many aluminium Cigarette lighters and Signet rings. I also had a good thing going selling them to my Pals and other locals.

Once, the Flying Scotsman had to stop at the Station in Hertford, en route to the North, and before my usual time of starting work, so I was able to get a lift on the Footplate and allowed to load Coal en route to Stapleford – something few People have ever done – where I pulled the Points for them, ie changed them from one Track to another so that they could proceed to Scotland.

When I first took the Job on the Railway, My Father had put my name down for an Apprenticeship as a Printer/Machine minder with Simson Shand, and in November 1944 the vacancy came up, and so I left the Railway and became an Apprentice Printer forthwith.