You are here: Home>Herts history>People>Gwendoline Page – From Boreham Wood To Bletchley 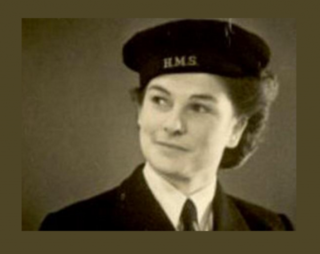 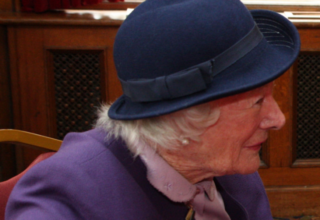 Gwendoline Page arrived in Boreham Wood with her family in 1928 when she was three years old.

She was 14-years-old when the war broke out, and a pupil at Queen Elizabeth School for Girls in Barnet.

She still remembers the Blitz, which affected Boreham Wood as it was on the way to, and from, several Nazi targets in London, and there was a barrage balloon flying near the town. “We were told that if the alert went off when we were cycling to school, we were to knock on the door of a house and take shelter. It never happened, so we were disappointed.” She remembers seeing dozens of enemy bombers flying over Boreham Wood on their way to London. “They sounded like a swarm of wasps coming over, and we could recognise the sounds of the enemy against our own,” she recalled.

Because her brother had joined the Royal Navy, Mrs Page joined the Women’s Royal Navy Service (WRNS) at the age of 18, and was annoyed to be sent to rural Bletchley Park in Buckinghamshire, instead of to a port.

At the time, scientists at Bletchley Park were carrying out amazing feats of deduction, cracking the Nazi’s Enigma machine, which enabled them to decode enemy signals, helping to turn the war in the Allies’ favour. But the scientists and staff were not allowed to discuss their work, with each other or with outsiders, careless talk cost lives.

Gwendoline worked in the Naval Section at Bletchley Park, indexing U-boat signals & later on the Japanese vessels index based in Colombo.

She says that indexing the U-boats built up a complete picture of the vessel, including who the Commander was.In 1941 Great Britain had only 10 days of food supplies left, so tracking where U-boats were and destroying them before they hit crucial supply vessels was of paramount importance.

Gwendoline knew because of her work that her brother’s British Naval ship was being dive bombed by the German Air Force in the Mediterranean but could not say anything or react to this news.

Luckily her brother survived and it was only 30 years after the war, due to the secrecy around Bletchley, that she was able to disclose her work to her brother.

After the war was won in Europe, Mrs Page took part in the Pacific campaign. She remembers the luxury of living and working on tropical islands, where Wrens were still expected to eat traditional British meals such as suet pudding, and the disappointment of arriving back in a cold, damp, mid-winter Britain, where rationing was in force during the post-war austerity years.

You can hear Gwendoline speak about her life at Bletchley at the Bletchley Trust website here https://www.bletchleypark.org.uk/podcast/904362/Gwendoline_Page.html

Read about her work in WW2 in her books “We Kept the Secret” and “They Listened in Secret” . Gwendoline’s book, Growing Pains: A Teenager’s War details her experiences growing up during WW2.