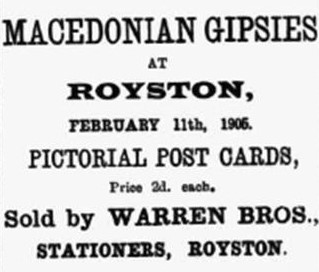 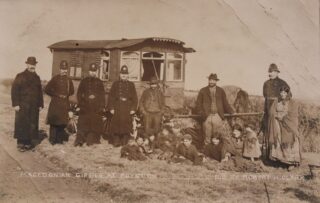 In February 1905 Royston found itself playing host to some visitors, a group of roving ‘Madedonian Gipsies.’

They had arrived from Cambridgeshire but the Hertfordshire police made sure they moved on towards Baldock.

The question was, were they Macedonian? Were they even gipsies? And, why were they here?

One Australian journalist had been hopelessly following them round the country trying to find out more. He remained one step behind the police who would not tolerate them stopping on their patch and found his attempts to make contact constantly frustrated.

These visitors might be unwanted and poor, but they proved good for business. Royston’s photographer snapped them and from the photographic plate the Warren Brothers produced postcards that sold very well indeed.

Labelled ‘Human Vermin’ by the national press, their fate would influence Britain’s response to travellers and refugees to this day.