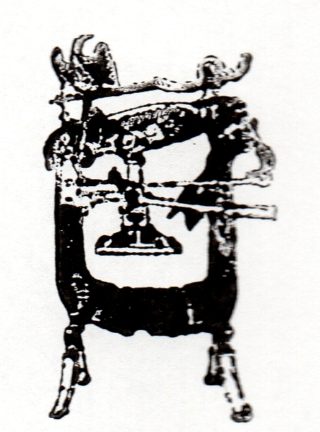 A (reasonably) good impression of a Columbian Printing Press

In Part 1 Graham Palmer explored the early life of Royston’s first recorded black resident. In Part 2 he investigates Roger Britten’s later life and his family.
*
Roger Britten was an expert in his trade. He knew all there was to know about stereotypes and making good impressions (both phrases coined by printers to describe their work). Despite a fit of conscience over slavery, Victorian Britain could not allow him the same opportunities as his white adopted siblings but he still went on to be highly respected.
*
Roger’s adopted father, had been suffering from heart problems for years. William Garland Barrett finally died in March 1865 and his death certificate marks him not as minister but a ‘Literary Man’. What had happened is anyone’s guess. It seems Barrett’s death may well have been what Roger had been waiting for, and seven months later, he was going by the name of Roger Mark Britten. The adoption of a Biblical middle name is normally a sign that someone has been confirmed in the Church of England, something that would have caused a major rift between himself and his tea-total non-conformist adoptive father.

Roger had a very down-to-earth reason for wanting to be confirmed: he was marrying out of the faith. Fanny Clarke was white and a 24 year old dressmaker. He had met her in Royston where her father was the family coachman to the Phillips family who owned the town’s brewery. They were married at St Saviour’s Church in Pimlico in October 1865.

Having finished his apprenticeship in Royston, Roger had apparently been offered a job at Eyre & Spottiswoode Ltd, the printers to Her Majesty’s Stationery Office in London.

Life for the newly-weds was cramped, squeezed as they were into a terraced house in Charlwood Place with two other families. By 1871 they had a 3 year-old daughter Ethel Jane and an 8 month-old son. Sadly, Charles never reached his second birthday, but within six years the family had managed to move into three rooms on the second floor of a house in nearby Tachbrook Street. It was there that a second son, Roger Joseph Clarke, was born. Things seemed to be on the up and they moved again, this time into the rapidly expanding suburb of Battersea. The family shared 9 Freke Road with that of a coal merchant’s assistant. It was probably at this time that Roger started working in the printing department of the India Office, producing official forms and documents, enabling his son eventually to claim on his marriage certificate – rather grandly – that his father had been a civil servant.

In 1883 Roger’s natural father 80 year-old Figaro Britten managed to make contact and ‘expressed great interest in the welfare of his much respected son.’ But Roger at 43 was not well. He had contracted bronchopneumonia. With Fanny by his bedside, he died at his home on 1 June. As a result of his industrious efforts he was able to leave £236 16sh to his widow, money which helped Fanny educate both children and send young Roger to Blackheath College which promised a ‘Sound preparation for the Desk, Commerce, Public Schools, Wellington College, Ships Britannia and Worcester, &c.’

The Royston Crow ran an obituary, stating that Roger ‘through his good temper and amiability, won the affections of those around him wherever he went.’ It was said his three adoptive brothers travelled back to Norwood to attend his funeral.

Ethel Jane Britten attended Stockwell Training College for teachers and became an Assistant mistress at New Road Board School in 1889. In 1891 she was living with Fanny, her widowed mother, at 59 Marmion Road, Battersea and working as a teacher at the Catford Board School. Her 67 year-old mother died on 3 February 1909 and it seems Ethel moved in with her brother and his wife. She worked in various schools including the Gideon Road LCC School (Battersea) and on several occasions took on the role of Acting Head Mistress. She remained single and died on 12 August 1949 at the Hostel of God (a hospice) on Clapham Common.

Roger Joseph Clarke Britten seems to have married twice. His first marriage was to Florence Francis Slater and it seems they never had children and by 1934 he had remarried. He had various jobs including editorial clerk, secretary and clerk in a religious house for the (Anglican) Church Missionary Society. He died on 26 June 1951. At time of death he was a patient at the Knowle (Psychiatric) Hospital in Fareham.

Having settled Roger to a trade, William Garland Barrett ensured his blood family had the best education he could afford. They went on to achieve great things.

Rev. Dr. George Slaytor Barrett had been born the same year as Roger and grew up in Jamaica, Guyana and then Royston. He was privately educated, taught briefly with his father in Croydon and rapidly rose within the Congregational Union of England and Wales, becoming its chairman in 1886. He compiled the church’s hymnal which was used throughout Britain and wrote religious tracts. According to the Royston Crow, he asked to officiate at Roger’s funeral.

Sir William Fletcher Barrett was a scientist, educationalist and populariser of physics and psychical research. He was a fellow of the Royal Society of London, the Royal Society of Edinburgh and the Royal Dublin Society and was knighted in 1912. As a devout Christian, he saw the ‘Scientific investigator as the high priest of God.’ In 1873 he became Professor of Experimental Physics at the Royal College of Science for Ireland and amongst other achievements discovered Stalloy, a silicon-iron alloy. His demonstrations of electro-magnetism and how high-pitched sounds caused gas flames to shrink and spread out would in an earlier age have been seen as magic. The thought struck him that some people might similarly be ‘sensitive flames’ attuned to different pitches. Gradually he became fascinated with subconscious knowledge, the paranormal and spiritualism and later went on to found the Society for Psychical Research.

Charlotte Ann Eliza had been born in Guyana in 1846 and spent her early-teens in Royston. By 1861 she was simply known as Anna and was a scholar. She is difficult to trace.

Rev. Edwin Relfe Barrett was born in Royston in 1849. He followed in his father’s footstep and became a missionary for the LMS in Shanghai. He returned to England due to his wife’s ill-health and became a Congregational Church pastor. He was a Director of the London Missionary Society (LMS) from 1905 to 1913.

Jessie Elizabeth Barrett was born in Royston in 1851. In 1871 when she was living with her brother William’s family at Isleworth and working as a Governess. She never married. She died at Rectory Cottage, Heston on Easter Sunday 1915 and was buried in St Leonard’s Churchyard. She left all of her money (£281 5s 3d) to her sister Rosa.

Rosa Mary Barrett was born in Royston in 1855. She was a prominent social reformer, educationalist and suffragist and was awarded the medal of the Howard Penal Reform League for her work Juvenile Criminals. She moved to Ireland with her mother and brother William and there set up Dublin’s first crèche – aiming to ensure a good start for the poorest children. She went on to found the Irish section of the National Society for the Prevention of Cruelty to Children (NSPCC). Her publications include the Rescue of the Young, Foreign legislation on behalf of destitute and neglected children, a Guide to Dublin Charities and a study of the founder of the Write Cross Army (a Christian organisation that campaigned for men to respect women), Ellice Hopkins : a memoir. She was a co-founder of the National Women’s Health Association for Ireland and represented the Irish Women’s Suffrage Federation in London in 1912. During the First World War, the Women’s International Congress (which included female delegations from the warring countries) met in the Hague and discussed the principles of constructive peace. Rosa was on the British Committee but was not granted permission to attend by the Home Secretary. At other times she travelled widely and was the compiler of Irish travel guides for the series published by Ward, Lock & Co. In later life she became interested in pyschic research and edited a series of essays, The Seekers. On his death, she completed her brother William’s study of Christian Science, The Religion of Health. She died in Welwyn Garden City in 1936. According to her obituary in the Times, ‘She had a keen sense of humour, gathered interesting people round her, and charmed all who came in contact with her.’