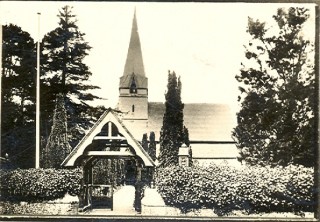 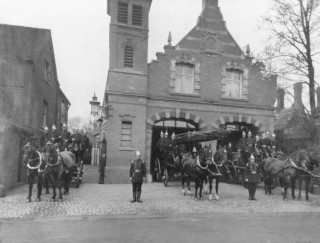 For the next two years, 1908 to 1909, I continued working for my father, and on only one occasion did I leave him for a few months and go to work for a farmer, after a row over money.  My father had plenty of money but did not like spending it, and I used to have a job getting enough out of him for clothes.  On more than one occasion, my father, who used to keep a lot of his money in his clothes box in his bedroom at The Gander, showed me two hard hats full of sovereigns that he had saved whilst at the pub.

He always kept his box and his bedroom door locked, and I remember on one occasion there were a few robberies going on around the place, and he put a large chain and lock on the stairs door.

The pub was a two-storeyed building.  When I was almost fourteen, my father sold the pub, which was de-licensed, and after receiving his compensation he sold everything, including furniture, and sailed for Sydney with about £5,000, which was big money in those days.  My mother, sisters and brothers were away at the time, and I was left with my father’s sister at Leavesden.

On the 14th January 1910, I obtained work on a farm and went to live at the farm.  I was now on my own and began to save money.  After a while at this farm, I was offered a position at a large livery stable where there were plenty of good horses – hunters.

This stable hired out brakes, Governess carts, Dog carts, and even supplied the horses for the fire engines at Watford.  I enjoyed myself at this place, because I could handle horses, although I was only fourteen years old.  I was also supplied with a uniform to wear when I drove people.  I got good wages and quite a lot in tips when I drove people to the rail and other places.

Horses and the Royal Navy

The horses used for the fire engines were changed every few years, as they could not be trusted after they had been used with the brigade and returned to the stables.  They would bolt every time that they heard a bell ring, and could not be used in passenger-carrying vehicles.  I used them on all kinds of jobs, except those to carry passengers, and at no time did one ever get away from me or smash a vehicle.  I have seen them bolt with others at the stable, and smash several vehicles.

I still have the reference given me in 1910 and 1911, showing that I was good with horses and could handle them.  I was horse breaking when I was fifteen, but by this time I had saved a bit of money and was thinking of seeing more of the world.  I had rented a cottage, furnished it and given it to my mother, three sisters and two brothers for a fresh start in a new home.  I left them reasonably comfortable.

Not a very lucky family

I had not heard anything of my father since he sold The Gander and left for Sydney.  Neither had my family heard of him.  There had been six boys and three girls when we lived at the pub: a girl and a boy older than I, and the rest younger.

We were not a very lucky family.  The elder boy was injured in the head when he was about eight and fell out of a loft.  The next boy younger than I was also injured in the head at school, both boys dying a few days after being injured.  Another boy died whilst a baby, and all were buried at Garston Churchyard.

This left me with two younger brothers, who joined the navy toward the end of the First World War.  One went down with his ship in a hurricane off Bermuda, and the other picked up some tropical disease in Hong Kong when stationed there and died.  I am the only boy of the six living.

In 1911, before I was sixteen, I decided to leave England and come to Western Australia.  I was still on my own and did not have much money left after paying my fare.  I arrived in Fremantle early in January 1912 on the Kiaparajust before turning sixteen.  I had only five shillings when I arrived and no friends or relatives in Western Australia or travelling with me.

My first job in Western Australia, in January 1912, was at Sandstone, where I worked in a dairy about eight miles from town in the bush.  I worked long hours, 2 am to 8 pm.  We started milking at 2 am – I used to milk twelve cows twice daily.  The milk was delivered in Sandstone.

We were milking twenty-four cows.  I used to look after the cows in the bush during the day, as there were now fences, mix feed, cart water, chop wood, cart all feed and clean yards, as well as watching the cows did not stray.  I was going all the time, and received £1 per week and keep, but left as soon as my three months was up.  It was necessary to stay three months, or I would have to pay my fare back to Perth.

At this time, the Morawa country on the Wongan line was opening up.  There was no Wongan line in those days – everything was carted out there from Mingenew on the Midland Line.  I made for Mingenew, and for the last nine months of 1912 worked at Mingenew and Morawa.  I used to drive the Mail coach weekly from Mingenew to Morawa and Pinthurka, three horses in a buggy, a hundred-mile trip or more.  I delivered all mail, including registered artic railway packages and goods which weren’t too heavy.  I also took passengers and supplied them with food, as none was available on the way.

At this time, I was sixteen and was living on the largest station there at the time, Airegully. In 1913, I was employed on the station, droving sheep and cattle, and horse-breaking, also trapping horses on the coast at Mingenew, Strawberry and Dongara.