The Great War and Gallipoli 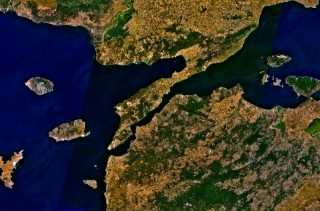 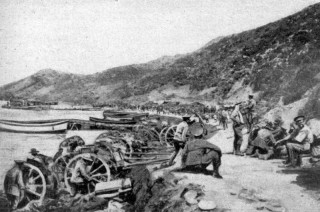 View of Anzac Cove, Gallipoli, shortly after the landing of 25 April, 1915
The War Illustrated (Public Domain)

During the 1914 season, I was at Murgoo station and was there when war broke out on 4th August 1914.  The war had been going for about a week before we heard the news.

As soon as the shearing finished, I left by camel team for Pinder, a hundred miles away, and then by train to Geraldton, where sometime in September I tried to enlist but was refused as I was only eighteen and had no-one to give consent.

I travelled by boat (I believe it was from Geraldton to Fremantle) and again tried to enlist.  When I arrived at Perth, at the Francis Street drill hall, they took my particulars and told me to wait until they called for me, as I was still too young.  I went to Guildford, where the 10th Light Horse had been formed, and after passing the riding test and joining up, was found to be under age without consent and was sent to Blackboy Hill Camp, where I stayed with the A.I.F. until I was nineteen.

I then left on the first boat out of Western Australia, the Itonus, on the 22nd February with the third reinforcement of the 16th Batallion.  My number was 1612, and we joined the 16th Batallion in Egypt before they left for the landing of Galippoli at Heilloplus.

I saw the Battle of Wazz-a in Cairo on Good Friday 1915.  The 16th left for Lemnos on Easter Sunday, two days after the Battle of Wazz-a, for the landing at Anzac on the 25th.  I was on the Galippoli and saw plenty of fighting, mainly with rifle and bayonette.  We lost a lot of men and were relieved about October for a spell of a few weeks on Lemnos Island.  Those of us who were left had our photo taken with the new reinforcements.  The photo is in the book History of the 16th Batallion – my photo is there with the others.

I was recommended with several others at Curlewis Post, Galippoli, for the D.C.M. by an Indian Officer of the Gurkha Batallion, during heavy bayonette and rifle fighting on the 6th August 1915.  There was only a few of the 16th there.  We had been cut off from the rest and had joined up with the Gurkha Regiment and hung on to what was later called Curlewis Post, because Lieutenant Curlewis was either with us or joined us there.

I’d been at Suvla when the Clyde was beached and seen the worst fighting on Galippoli there.  The flat where the British troops were landing from the Clyde was on fire, and one British Soldier won the V.C. there for dragging his mate out on a shovel. There were some lives lost there.

Early on 5th August, about a dozen of the 16th I was with went over the top of Hill 971, which appeared to be the highest hill there, and saw what we thought was the Narrows at the Dardanelles.  We never got far before we were almost surrounded by the Turks and had to make back.  This was when we got cut off from the 16th.

After fighting all day and that night, we eventually fought our way back and joined up with the Gurkhas.  There was only five of us who got back, but we found a few more with the Gurkhas at Curlewis Post.  We searched the dead for tinned meat and biscuits and water, as we had none of our own left.

We were reported missing in the papers, but were with the Gurkhas fighting night and day.  We did not get any medals and were informed that the Indian Officer had been killed in heavy fighting, and that the recommendation must have gone astray.

A Visit from Kitchener

I stayed with the 16th at Galippoli until the snow came, about November, I think it was.  I was there when Lord Kitchener visited the front line outposts.  I was speaking to him, when he asked me if there was anything I needed.  I said yes, I needed a pair of boots, as I had a hole through the bottom of mine.  He told me I could have a new pair, which I got that day.  He also ordered us a bread ration from Imbros Island, which also arrived that day.

It was at this time he was said to have ordered the evacuation of Galippoli.  I left there with Black Water Fever, and was taken back to Egypt, where I was in the Gizera Plalace Hospital until a few days before Christmas 1915.  I was then sent to Ras-El-tin Convalescent hospital at Alexandria for about a month.  I had Christmas there – it was good after being at Galippoli, Lemnos, Imbros and then Galippoli again.

I rejoined the 16th at Tel-el-keber, near Ismalia on the Suez, about February 1916.  Several new Batallions were being formed there: the 48th and 4th Pioneer Batallions.  I joined the headquarters signallers of the 4th Pioneers at this place, and I was at the Suez Canal for the first Anzac Day.  We later moved on to Serapium, on the Suez desert, until we went to France in about June 1916.

The Somme to London

Possiers, on the Somme in France, was our next big battle.  I was a signaller and runner through the two big battles, with Major Lee of the 4th Pioneers.  Major Lee was killed, and I got buried with him and was dug out.  I was in everything the Aussies were in, in France and Belgium.  I was buried twice and dug out, at Possiers and Kemel Hill, and gassed at Messines.  I hung on and did not leave the Batallion.

I was given ten days leave in London in October 1916, arriving there on Saturday night, the night the first Zepp was brought down at Potters Bar.  I saw it come down in flames.  I’ve got a piece of it in my pocket made into a souvenir.

I had another ten days leave in August 1917, and fourteen days in July 1918.  During this leave, I married my present wife.  After fourteen days leave in January 1919, I obtained my discharge from the A.I.F. in London in June 1919, after four year and two hundred and seven days service, and four years and fifty-four days abroad.