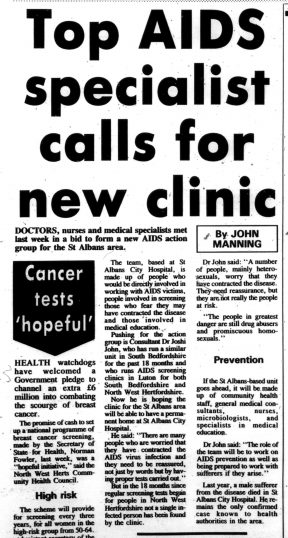 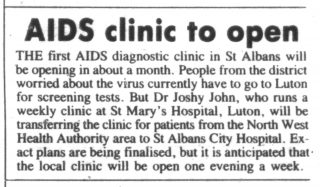 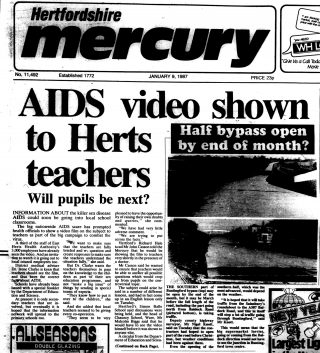 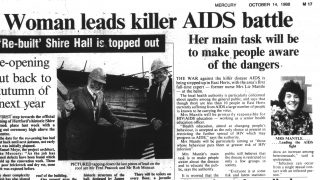 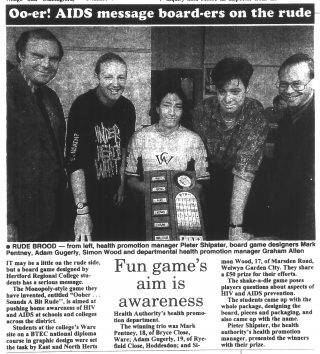 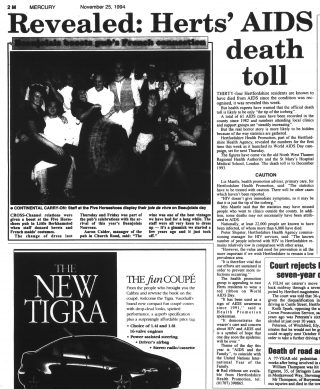 AIDS stands for Acquired Immune Deficiency Syndrome. It is an illness that stems from HIV, or Human Immunodeficiency Virus, which damages the cells in a person’s immune system and weakens their ability to fight infections and disease.

The first reported cases of HIV and AIDS appeared in 1981, even though the illnesses are believed to have originated in the early 20th century. HIV and AIDS hit LGBTQ+ communities hard, killing many people. Eventually the illnesses spread to people of all communities, ethnicities, genders and sexualities across the world. Over time, new treatments have been found to allow many people infected with HIV and AIDS to continue to live more normal, longer lives.

Although LGBTQ+ communities were affected by AIDS very early on, even from the start there were many outside the community who were infected. In the media, however, attention was very much focused on gay men who were portrayed as being responsible for the spread of disease.

When HIV and AIDS were killing many people, there was a great fear across the globe of this new, unknown disease. It wasn’t always clear how the disease was spreading, and many places treated those infected with AIDS harshly, refusing to touch them for fear of spreading it. Diana, Princess of Wales, became a strong advocate for people with AIDS. She opened the UK’s first purpose built HIV/Aids unit at London Middlesex Hospital in 1987. She also famously shook the hand of an AIDS patient without wearing a glove to tackle the stigma and fear around the illness.

In January 1987 the Hertfordshire Mercury reported that teachers in Hertfordshire had been shown AIDS educational videos to become more knowledgeable on the illness. By this time, over 1,000 members of East Herts Health Authority’s employees had also seen the video, and local council employees were invited to screenings. Hertfordshire was keen to educate people about AIDS to make sure that clear and accurate information was spread throughout the county.

1987 also saw a significant rise in the profile of AIDS on the world stage. In February, the World Health Organisation launched the Global Programme on AIDS to raise awareness. By December of that year, over 71,000 cases of AIDS had been reported to the WHO, with more than half of those cases in the USA. However, the WHO believed the scale of infection was far higher, estimating between 5 and 10 million cases worldwide.

As it became clear that AIDS was going to be around for a long time, Hertfordshire began to make plans to tackle it. In early 1987, town councillors gathered to decide the best course of action. In St Albans a team of medical specialists, doctors and nurses called for an AIDS action group to be created alongside a dedicated clinic in St Albans City Hospital. By September that year it was confirmed that one would open the following month. In October, Hertfordshire County Council published a draft strategy for AIDS and HIV infections.

Despite swift local authority action, AIDS was still seen as a major issue in Hertfordshire. In September 1988, the Hertfordshire Mercury reported that the North-West Thames Health Region, which included East Hertfordshire, had seen the number of people with AIDS nearly double in just a year. In fact, this region was caring for 46% of all people with AIDS in England and Wales. Councils were keen to respond, and towards the end of 1988 Liz Mantle, a former nurse, was appointed as senior health education officer to promote knowledge of HIV and AIDS to try and curb infections. Mantle highlighted that many members of the public believed that only a few groups in society were at risk from HIV and AIDS, and that cases were increasing among heterosexuals. Welwyn Hatfield District Council announced they were going to train staff to help homeless AIDS victims, whilst a St Albans AIDS Centre opened in December 1988 in Church Crescent. New AIDS clinics continued to open across Hertfordshire during the next few years.

Despite these efforts to educate the public and support those with HIV or AIDS, some of the old ways of thinking remained. The Welwyn Hatfield Review published a piece in December 1988 about the opening of the St Albans Aids Centre. The centre had been opened by television personality Barry Norman and his wife, author Diana, in a bid to raise awareness that AIDS and HIV that could also affect heterosexual couples and their children. AIDS counsellor David Stafford-Trewhitt was quoted extensively, showing his anger that heterosexual people had become complacent, and that gay people were the ones who were doing their best to protect themselves as they had been watching their friends dying.

As the 1990s arrived, reporting in Hertfordshire newspapers on HIV and AIDS began to slow, but new clinics continued to open across the county. In July 1990, Hertford County Hospital opened a clinic for AIDS, but also for anyone with sexually-transmitted conditions. The following year, St Albans’ mayor Peggy Hughes visited to the new premises of The Crescent AIDS Centre in Russell Avenue, St Albans. In 1991, Elton John opened a new HIV and STD clinic at Watford General Hospital.

In November 1994, the Hertfordshire Mercury published figures showing that 61 AIDS cases had been reported in the county since the discovery of the disease, and 34 residents had died. The figures were believed to be higher in reality, with officials highlighting that there would have been cases that weren’t reported or were missed, or deaths that had been attributed to other causes. At least 22,000 people were known to have been infected nationally, and more than 6,000 people had died. By now, many people were extremely aware of the illness and what it could do. The medical community was also a lot more informed as to how the infection spread, and there were a variety of treatments to help those infected. Despite these improvements, in 1999 the World Health Organisation announced that AIDS was now the fourth biggest cause of death worldwide.

Ever since AIDS became publicly recognised, LGBTQ+ people faced stigma. AIDS was seen to be connected to moral issues in society, from drug use, prostitution, promiscuity and gay and bisexual relationships. The AIDS crisis heightened homophobia across the world at a time when LGBTQ+ people already faced so many barriers.  Even today, many perceive AIDS to be something that occurs principally among LGBTQ+ communities so raising awareness and understanding remain important.