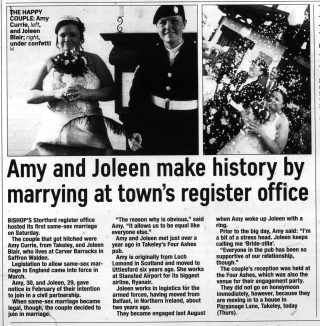 St Albans had the most civil partnerships in the first year that they were legalised.
The Herts Advertiser 28/12/2006

Historically in the United Kingdom, marriage was understood as being between a man and a woman. However, it wasn’t until 1971 that the Nullity of Marriage Act made this definition explicit.

Just four years earlier, in 1967, England and Wales had decriminalised homosexuality, but in Scotland and Northern Ireland at the time of the Nullity of Marriage Act it was still illegal for men to engage in homosexual acts. This lasted until 1980 and 1982 respectively.  Although attitudes between same-sex relationships were beginning to change, there was still a long way to go.

In 2004, the Civil Partnership Act was introduced to Parliament proposing civil partnership as an equivalent to marriage for same-sex couples. Couples in a civil partnership were to be entitled to the same property rights, exemptions, social security, pension and parental responsibilities as married couples. This was a landmark piece of legislation. The Bill was voted in at 391 MPs for and 49 against. It officially came into force on 5 December 2005.

People across the country, including Hertfordshire, rushed for the opportunity to finally solemnise their relationships. In North Herts, Keith Fitzpatrick-Matthews and his partner Tony were the first to enter a civil partnership on 21 December 2005. A year later, the Herts Advertiser announced that more same-sex couples had entered a civil partnership in St Albans than anywhere else in Hertfordshire. In the first year across Hertfordshire 230 couples had entered civil partnerships, with 46 of these in St Albans. This included the Dean of St Albans, Dr Jeffrey John, and his partner of 30 years, Reverend Grant Holmes. This made Dr John the first senior member of the Church of England to officially enter into a same-sex partnership.

However, whilst civil partnerships were a fantastic boost to the rights of same-sex couples, many viewed it as lesser to marriage, particularly as same-sex couples still could not marry in church. Moreover, some heterosexual couples wanted the right to engage in civil partnerships, as they viewed marriage as archaic. There were also problems with the legislation regarding transgender people, as if someone in an opposite-sex marriage underwent gender reassignment surgery, the couple were compelled to end their marriage. As such, a variety of campaigns were created to bring unity and equality between marriage and civil partnerships, so that partners of any gender could partake in either.

Following the 2010 General Election which saw a coalition government between the Conservative and Liberal Democrat parties, it was announced that there were plans to extend marriage to same-sex couples. On 24 January 2013, the Marriage (Same Sex Couples) Bill was introduced to Parliament. This would allow civil marriages for same-sex couples, although there were exemptions to allow religious organisations to refuse to conduct same-sex marriage ceremonies.

The readings for the Marriage (Same Sex Couples) Bill was more split than the Civil Partnership Act, as many conservative and religious organisations and individuals felt that civil partnership gave LGBTQ+ people equal rights, and they did not need to encroach on the traditional institution of marriage. The second reading of the Bill passed by a majority of 400 to 175, but the third reading saw a drop to 366 vs 161. Hertfordshire MPs were split in the vote. St Albans, Stevenage, Hitchin and Harpenden, North East Herts, and Hemel Hempstead MPs voting against, whilst Watford, Welwyn Hatfield, and Broxbourne MPs voted in support. The MPs for Hertsmere and Hertford and Stortford did not vote. Despite this split, the Bill passed through both Houses and received Royal Assent on 17 July 2013. Same-sex couples now had the same legal right to marriage as mixed-sex couples.

With the passing of the Act, same-sex couples were allowed to marry from the 13 March 2014 in England and Wales. Again, couples in Hertfordshire were eager to exercise this new right. In May 2014, Amy Currie and Joleen Blair had the first same-sex marriage in Bishop’s Stortford. Eight couples in North Hertfordshire immediately registered for marriage, including Jane Lombari and Katie-Jayne Bethell who were married on 24 May. Although many churches refused to marry same-sex couples, some religious organisations in Hertfordshire announced their intent to support these marriages, including Stevenage Quaker Meeting House.

The rest of the UK followed on from England and Wales. Scotland legalised same-sex marriage in 2014, although it took until 2019 for same-sex marriage to be legalised in Northern Ireland. That came into force in January 2020, meaning across the UK people of any gender can now marry or have civil partnerships.