An extract from the start of The Picture of Dorian Gray by Oscar Wilde. 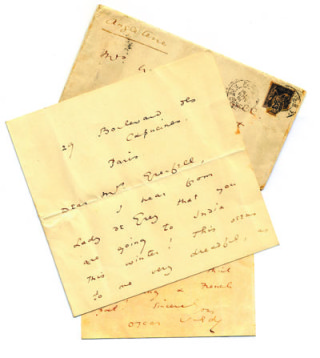 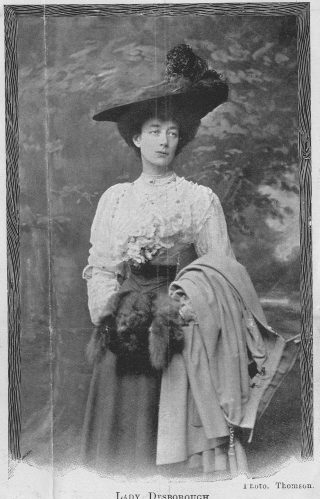 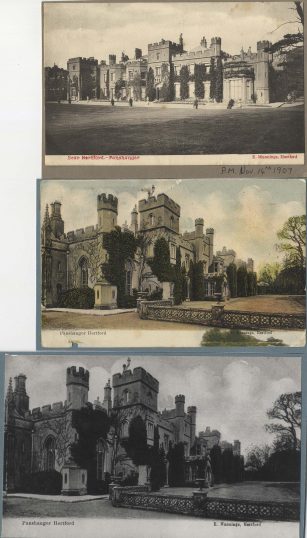 Oscar Wilde was born on the 16th October 1854 and became one of Ireland’s most famous poets and playwrights. He is also remembered today for his trial and conviction for gross indecency. We hold some of Wilde’s letters at Hertfordshire Archives and Local Studies, for he had connections and friends in the county.

Wilde’s mother was a poet herself, and she read poems to her young children which inspired Wilde’s own interest in the medium. His father, meanwhile, was a very skilled ear and eye surgeon who was knighted when Wilde was ten years old. Wilde therefore grew up in quite a well-off household, and their house was always filled with visitors who were part of the literary and medical worlds. He excelled at school and went to study classics at Trinity College in Dublin and then Magdalen College, Oxford.

Whilst at Oxford, he grew his hair long and became interested in the aesthetic movement which focused on beauty and decoration. He filled his rooms with flowers, feathers, blue china and peacock feathers. He graduated Oxford in 1878 with a double first. After a brief return to Dublin, Wilde came to London and boarded with Frank Miles, a society painter. At the age of 27 he published a book of poetry which sold out, but was not received well by critics.

Through the 1880s, Wilde continued to write, but his love of aestheticism was continually caricatured and criticised by the press. His Irish blood did little to help his reputation at a time when there was a lot of anti-Irish propaganda in England. Wilde was portrayed in drawings as a monkey and a blackface performer as ways to demean his character and his heritage.

In 1884, Wilde married Constance Lloyd and the couple had two sons together. However, in 1886 Wilde met a man named Robert Ross who was to change his future. Ross was just 17 years old, whilst Wilde was 32, and it is believed the two began to have an affair not long after they met. This was dangerous for both of them, as it was illegal for men to engage in homosexual acts at this time.

By the early 1890s, Oscar Wilde became acquainted with Ettie Grenfell, Lady Desborough, who lived at Panshanger in Hertfordshire. Ettie had married William Grenfell in 1887, and they had three sons and two daughters together. Their eldest son was poet Julian Grenfell who died during the First World War. The couple also owned Taplow Court in Buckinghamshire, and it was at Taplow that they held aristocratic gatherings filled with politicians and intellectuals. This group was known as “The Souls” and had been gathering since around 1885, although the 1890s was when the group reached its peak. Visitors to Lady Desborough’s gatherings included Winston Churchill, H G Wells, Henry Irving, Edith Wharton and, now, Oscar Wilde.

Oscar wrote numerous letters to Lady Desborough, some of which are now held in our archives (for example under HALS ref: DE/X789/C1-C4). They became friends, and spoke of personal matters to each other in their letters. In 1891, Oscar Wilde published “A House of Pomegranates” which was a collection of fairy tales. One of the stories in the collection was called The Birthday of the Infanta and it was dedicated to Lady Desborough. In one of the letters in our archives (DE/X789/C5), Wilde writes to Lady Desborough about the new collection which was a follow-up to his first collection of stories “The Happy Prince and Other Tales” published in 1888. In the letter, he tells her that he has dedicated the story of the Infanta to her.

In 1890 Wilde published the first version of The Picture of Dorian Gray, one of his most famous works. However, critics disapproved calling it “unclean” and filled with “moral and spiritual putrefaction”. Although Wilde defended the work, he did revise it extensively before publishing it as a book in 1891.

Around the same time, Wilde became acquainted with Lord Alfred Douglas and certainly by 1893 the two of them had fallen in love and embarked on an affair. The two were not very discreet about their sexual orientations and relationship. Douglas also introduced Wilde to the secret world of gay prostitution. Their relationship soon came to the notice of Lord Douglas’ father, the Marquess of Queensberry, who confronted the couple numerous times. Each time, Wilde was able to persuade him to stay quiet. However, in June 1894 Queensberry visited Wilde at his home and threatened Wilde to end the relationship with his son.

In early 1895, Wilde’s most famous play, The Importance of Being Earnest, debuted in London to great acclaim. In the original version of the play, Hertfordshire is one of the settings, being the location of Jack Worthing’s country home. However, behind the scenes Wilde was still having problems with Queensberry who had planned to throw rotting vegetables on the stage at opening night. Wilde learnt of this plan in advance and had Queensberry barred from the theatre, but it was not enough to keep Wilde’s secret.

Days after the opening of The Importance of Being Earnest, Queensberry left a calling card at Wilde’s club which said “For Oscar Wilde, posing somdomite”. This was a serious public accusation to make, as if true Wilde would face prison. The death penalty for engaging in homosexual acts had only been abolished in 1861. Beyond prison time, though, if Wilde were to be found guilty of having performed homosexual acts then his reputation and life would be ruined.

Although his friends advised against it, knowing that information about Wilde was bound to come out, Wilde initiated a libel case against Queensberry. The only way Queensberry could avoid prison time for the crime of libel would be to prove that his accusations were true, and so he hired private detectives to gain evidence that Wilde had engaged in gay relationships. Again, Wilde’s friends tried to persuade him to drop the case or even flee abroad, knowing that the accusations against him were true, but Wilde refused.

The trial against Wilde became a huge source of interest in the press and wider society. Wilde was quite famous by now, and that he was accused of having a relationship with a Lord only increased the gossip. Unfortunately for Wilde, all the details of his involvement in gay prostitution and other homosexual relationships came out in court, his private life laid bare for all to read about. Queensberry was found not guilty of libel, as the court decided that his accusation was true. As he had been found not guilty, Wilde became liable for the expenses that Queensberry had incurred for the trial which financially ruined Wilde.

Even worse, because the court had decided the accusations against Wilde were true, after the trial was over, he was arrested for sodomy and gross indecency. The result of his trial was inevitable, and in May 1895 he was convicted of gross indecency and sentenced to two years’ hard labour, the maximum penalty. His time in prison was harsh, and he became sick, spending months in the infirmary.

Wilde was released from prison in May 1897, and he immediately left for France, never to return to the UK. He had no money left, having been ruined by the trials and his time in prison, and his reputation was tarnished. The last few years of his life were difficult, and his wife refused to meet with him or allow him to see their children, although she did send him a weekly allowance. His health, damaged by his time in prison and exacerbated by his poverty and depression, continued to decline, and in November 1900 he developed meningitis. He died on 30th November 1900. He was buried in Paris, where his body remains today. His tomb was commissioned by his old lover, Robert Ross, who was with him when he died. Ross had a compartment made in the tomb to fit his own ashes when he died, and they were transferred there in 1950.

In recent years, moves have been made to make amends for Wilde’s harsh treatment for his homosexuality. In 1995, he was commemorated in Poets Corner in Westminster Abbey with a stained-glass window which was unveiled by his grandson. In 2017, he was among around 50,000 men historically pardoned for cautions and convictions of homosexual acts under an Act informally known as the Alan Turing law.