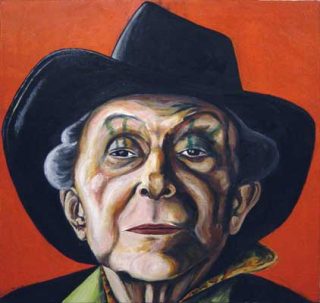 My first contact with Quentin Crisp came via the brilliant TV film, The Naked Civil Servant, when I wrote him a letter to share how moved I was by his wisdom and great courage. To my surprise he wrote back to me. Thus began a pen–friendship of several months. Some of his letters were laugh out loud, other were moving, all of them interesting.

Finally I learned he was coming to Belfast for the Queen’s University festival. I immediately phoned him and we arranged to have lunch together at my home. Thankfully we hit if off immediately and the conversation proved to be characteristically brilliant and hilarious. Also he ate everything in sight and played scrabble with my then two small boys, who were enchanted by him.

Our next meeting was at his famous dusty room deep in Chelsea, when he ran down the stairs to greet me. We sat and talked for a couple of hours before I look him out for lunch.   There was a heart–stopping moment when I stood at one end of the room putting on my make–up and he stood at the other end putting on his. What I hadn’t braced myself for was the verbal abuse shouted at Quentin by lorry drivers and people passing. I was working myself up to punch someone in the eye, but Quentin patted my arms, saying be very calm, Mrs Sands.

At the restaurant I was relived how welcome he was and that the owners had a special Quentin table for him. Over the coming years we met up in London at his room and in Belfast at my house. My lasting memory of him is of his generosity and the fact that no–one was ever turned away from his room. He was open all hours for anyone. “Quentin”, I concluded, “you’re just like Jesus”. He gasped, “Oh, the blasphemy, Mrs Sands” he cried. Then we doubled up with laughter…

I still miss him.