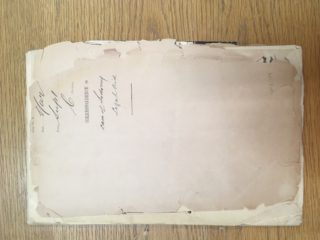 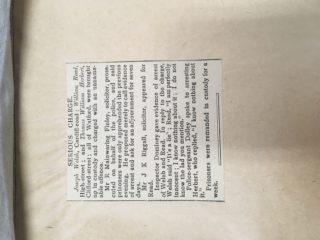 In April of 1907 three  men from Watford William Read, Thomas William Herbert and Joseph Welsh were charged with twenty-two charges of sodomy. Over the course of several years, the three men had met male sex workers together at William Read’s coffee shop, their own homes and various public spaces. They had also approached men at their work places and for Mr Welsh, the Salvation Army. The three men who respectfully owned businesses (such as the coffee shop) and homes also held respected positions in society. They were able to afford the use of sex workers, but also had significantly more to lose in the event of exposure.

Arthur Cowborough was the main witness and appears to be the sex worker that the men frequented the most and who had the greatest contact with other young men in the town. The statements given to the police on the 19th of March 1907, and statements by other witnesses make the intentions and orientation of Arthur difficult to define. On the one hand, in Arthur’s own statement he makes clear the transaction of money or food for sex (usually ranging from 1-3 pence) and emphasises several situations in which he refused to perform a certain sex act. From this we could suggest that Arthur’s engagement with sex work was one born from necessity and he himself has no personal desire for sexual relations with other men. However, when we consider other points of Arthur’s own statement and the relationships he had with other sex workers, it challenges this assumption. Firstly, statements such as the one given by Henry Drinkwater on the 20th of March 1907, describe a relationship in which money initially changed hands, but later the sexual relationship between the two men appears to be one of mutual pleasure. Secondly, whilst Arthur claims no other form of employment, he can afford lodgings with a Mrs Rose Rogers, so the need for food from these men does not seem to be from poverty but rather a bonus of these encounters. What is clear regarding the men who are arrested, the relationship is one based on financial transaction, whilst the sexual dynamic with men his own age or younger seems to be one of gratification and desire. Arthur’s clear attempt to appear separate from the homosexuality of the charged is most likely a tactic to avoid incriminating himself.

This circle of queer interaction would come to an end primarily due to the behaviour of Mr Welsh and Mrs Rose Rogers. Rose Rogers, the women from whom Arthur rented a room, became suspicious of Arthur’s behaviour when his shirts were soiled at the bottom. When Arthur returned home from being beaten by Mr Welsh whom had feared blackmail by Arthur, she offered to call a doctor to which Arthur replied “no, no, no, Welsh will drown me and I’ll be locked up!” She then followed Arthur one night, confronted Mr Welsh thus sending him into a rage. This altercation led to the arrest of Welsh and the revealing of the entire scene.

This document provides us with a unique and intimate insight into the lives of queer men in early 20th century Hertfordshire. Not only do we find details of sex work, such as prices and locations (Watford High Street) used to locate men for sex, we are also made aware of the complicated dynamic between the men who engaged in sex work and those who paid for the services. The behavior of the three charged men danced a fine line between exploitation and consent and the actions of Mr Welsh were entirely unacceptable. In today’s society it is important that we retain our judgement and recognise the context of the situation. The men caught up in this case, whether they lived a double life or had a small number of encounters driven by curiosity faced not only arrest, severe stigma, but also shame and self-loathing. Mr Welsh’s violent attack on Arthur Cowborough was fuelled by the very real fear of the life destroying consequences exposure of his sexual behaviour would have. In can appear that these men lived a shadowy existence, as they were forced into those shadows by the world and society around them.