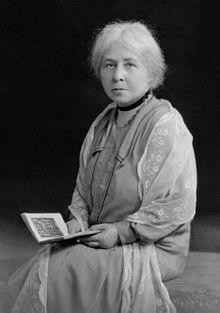 The first woman to be appointed as a lecturer in archaeology in the United Kingdom, she worked at University College London (UCL) from 1898 to 1935. She served as President of the Folklore Society from 1953 to 1955, and published widely over the course of her career.

Born to a wealthy middle-class English family in Calcutta, British India, Murray divided her youth between India, Britain, and Germany, training as both a nurse and a social worker. Moving to London, in 1894 she began studying Egyptology at UCL, developing a friendship with department head Flinders Petrie, who encouraged her early academic publications and appointed her Junior Professor in 1898.

In 1902–03 she took part in Petrie’s excavations at Abydos, Egypt, there discovering the Osireion temple and the following season investigated the Saqqara cemetery, both of which established her reputation in Egyptology. Supplementing her UCL wage by giving public classes and lectures at the British Museum and Manchester Museum, it was at the latter in 1908 that she led the unwrapping of Khnum-nakht, one of the mummies recovered from the Tomb of the Two Brothers – the first time that a woman had publicly unwrapped a mummy.

Recognising that British Egyptomania reflected the existence of a widespread public interest in Ancient Egypt, Murray wrote several books on Egyptology targeted at a general audience.

Unable to return to Egypt due to the First World War, she focused her research on the witch-cult hypothesis, the theory that the witch trials of Early Modern Christendom were an attempt to extinguish a surviving pre-Christian, pagan religion devoted to a Horned God. Although later academically discredited, the theory gained widespread attention and proved a significant influence on the emerging new religious movement of Wicca. From 1921 to 1931 Murray undertook excavations of prehistoric sites on Malta and Minorca and developed her interest in folkloristics.

Awarded an honorary doctorate in 1927, she was appointed assistant professor in 1928 and retired from UCL in 1935. That year she visited Palestine to aid Petrie’s excavation of Tall al-Ajjul and in 1937 she led a small excavation at Petra in Jordan.

Taking on the presidency of the Folklore Society in later life, she lectured at such institutions as the University of Cambridge and City Literary Institute, and continued to publish in an independent capacity until her death.

Murray’s work in Egyptology and archaeology was widely acclaimed and earned her the moniker of “The Grand Old Woman of Egyptology”, although after her death many of her contributions to the field were overshadowed by those of Petrie. Conversely, Murray’s work in folkloristics and the history of witchcraft has been academically discredited and her methods in these areas heavily criticised. The influence of her witch-cult theory in both religion and literature has been examined by various scholars, and she herself has been dubbed the “Grandmother of Wicca”.

Some useful exploration of her life here in Ruth Whitehouse’s article:
http://www.ai-journal.com/articles/10.5334/ai.1608/