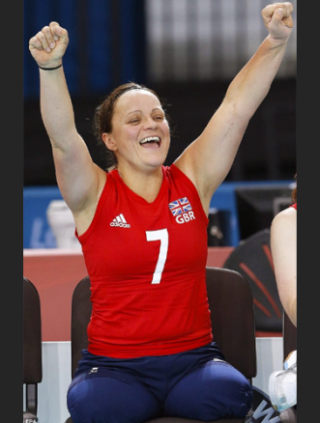 Martine made her sitting volleyball debut at the 2010 Kent International against the Paralympic Champions, China, and she has now gained competitive experience of over 40 GB caps.

On the court, Martine can occupy any position, including Server, Hitter, Blocker and Libero. Her most memorable achievement to date was beating Canada at the 2010 World Championships.

At London 2012, Martine made her Paralympic debut and was part of the women’s Sitting Volleyball team which finished in 8th place.

Since 2006, she has been a public campaigner for the families of the victims of the 7/7 bombings. In 2010, she was awarded the title of Hertfordshire Sportswoman of the Year and in 2012 she was named the 2012 Inspirational Woman of the Year in Zest magazine.

In 1996, Martine graduated with a degree in Psychology and Communication Studies from the University of East London.

Whilst she describes her greatest achievement to date as flying solo in an aeroplane she hopes to become an ambassador for disability sport in the future.

Martine was injured in the London 7/7 bombings in 2005. As a double above-knee amputee she is classified as a D athlete.