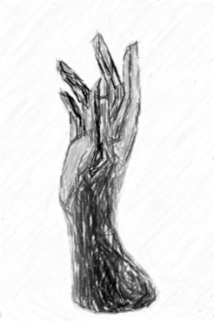 My pal, Trevor, and I had just reached the end of a hard, tiring day.

We’d cleared up, stocked up for the Next Morning Team and were getting ready to close up and head home for a well-earned lie-down, when a police car, driven by a lone policeman, came down the drive and screeched to a halt.

Having actually locked our front door, we indicated that the P.C. should meet us around the back.

Reading from his shaking notebook, he told us that a member of the public – a tommy tucker-pot – had reported seeing a human hand floating in the middle of the large pond on the fifth.

We decided that Trevor should accompany the policeman – Jack –to the scene whilst I looked after the club house and pondered – if you’ll pardon the expression – the action I should take next – including ‘phoning the boss to put him in the picture.

However, my thoughts were soon interrupted by the arrival of another police car – also with a sole driver, who turned out to be Larry.

Larry assured me that all was well but as Jack was a new Lad, it was felt prudent by the station commander, that he’d need a competent back-up in this particular instance.

I left Art back at the club house and led Jack – the policeman – to the pond on the fifth.

We didn’t converse much, as he was busy scribbling in his note book – obviously giving an account of his progress in the matter. At one point, though, he did say that he’d never been on such a gruesome mission and was a little apprehensive about the outcome. Especially, as there had been a spate of such call-outs resulting in investigations recently on account of other body parts being found in this neck of the woods.

We arrived at the scene and there, floating in the middle of the pond, was this Hand!

We mulled over our next course of action – wandering around the edges, pacing up and down and trying to estimate how far away the object was.

Deciding that the Hand was too far away and out of reach, I started to walk away. However, the next thing I see is Jack taking down the life belt hanging from its wooden post together with its attendant length of rope.

Larry joins us at this point and Jack asks him to tie the rope to the life belt and then wind it around himself to leave a couple of yards loose for me to hang onto.

He then swiftly takes off his tunic, removes his boots and socks and strips down to his underpants which fall to his ankles as he steps into the hoop and waddles, mincing into the water intent on reaching the hand.

However, within a few yards, he reaches deeper water and suddenly plunges up to his arm-pits – saved only by the life-belt.

This has the unfortunate effect of pulling Larry off his feet so that he makes quite a graceful twisting dive – fully clothed, of course – into the pond.

Being on dry land and having hold of the end of the rope, I started to pull them back to the safety of the bank. This caused Larry to flip over on his back which forced water to rush up his nose causing him to splutter some un-policeman-like language – well, O.K., some understandable language. Jack continued his quest to reach the hand by using his arms as paddles but makes negative progress as I’m still pulling on my end of the rope.

Eventually, we all manage to assemble on the dry bank of the pond and decide to abandon the quest for the hand.

Jack picks up his dry clothes, having merely pulled up his underpants, and puts on his socks and boots, and with Larry squelching, coughing, grumbling incoherently, and I make our way back to the club house.

I was on the ‘phone to the boss and we’d discussed the event as far as I knew it and swapped opinions as to which member of staff would be volunteered to take the plunge.

The bedraggled trio trudged into view and Trev led the still damp P.C.s into the shower room.

The boss wanted to hear the up-to-date situation, so I handed (sorry) the ‘phone to Trev.

I then provided Jack and Larry with dry towels and appropriate bits of clothing purloined from our vast collection of lost property items.

After expressing their thanks for all our help and promising to return the clothing soon, they left the scene, each to his own car.

Trevor, having finished his report to the boss and briefly telling me what had happened, and I locked up and wearily wended our way home.

It was later ascertained, using high-powered binoculars, that the floating hand was actually a shop model mannequin’s arm and hand, obviously thrown into the mini-lake by a demented golfer who’d had a lousy round, had a grudge against society and wanted to add mayhem to the police’s body-parts investigation.

Incidentally, the hand is still floating there, pending the ball-collecting diver’s annual visit.

Of course, the police had set up a special book for the floating hand reports from the public, the first line being filled in and the subsequent several pages with the word ‘ditto’.

Needless-to-say, I have been bribed to change the names to protect the guilty in order to off-set possible private injunctions.