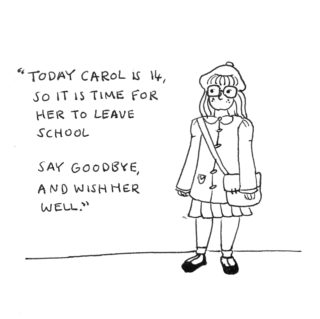 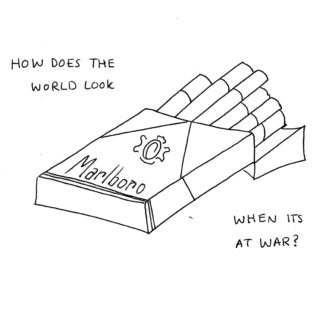 A city child aged nine, I went for a week to visit my Gran in a Yorkshire village. I was there six months.

Gran was elegant, with thick glasses, blue eyes and beautiful white hair. ‘Roseleigh’, her home on the family nursery, also housed her daughter Elsie’s family, and Julia the maid.

The least appealing feature was the toilet, an unlit outdoor shed where you sat on a plank with two openings and buckets below. An alternative venue meant walking to ‘The Grange’, where Auntie Gladys lived. Its single throne promised privacy and a glimmer of light, but it was not ideal. One day Uncle Bert told me to wait outside while he removed a dead rat.

Sunday afternoon was bath-time. The heated rainwater from a tank on the roof was lovely and soft, but as I had to wait my turn until Auntie Elsie had finished, its coolness and soapiness never invited a long stay.

Happier memories include accompanying Julia to the well, where I would pump water for her to carry back on a yoke. The water was kept in the larder in a covered enamel pail, and was as cool and sweet as one could wish.

Julia cooked under Gran’s direction, but one morning I heard a fierce argument, followed by Gran bursting into the dining room, wringing her hands and hissing ‘Elsie’s daft’ as she stalked round the big dining table. Elsie had ordered her mother out of the kitchen. I sat, mute with astonishment, unnoticed in Gran’s agitation, but immediately aware that this must be a traumatic episode in many family’s relationships, as age cedes control to a younger generation.

I was free to explore the nursery, the glasshouses with their resident toads and the barn with fading cards recording past successes. The beauty of the lines of herbaceous plants captivated me, especially the phlox, chrysanthemums and dahlias as they approached peak flowering. People came from miles around to enjoy the spectacle.

In the nursery office, the telephone bore the number Bedale 2. Seeds were kept here in neatly labelled compartments, ready for packaging and despatch. I loved to feel them trickling through my fingers, but was sharply told to lay-off in case I muddled the stock.

On 3rd September we gathered in the dining room to hear Chamberlain say that the Germans had invaded Poland, ‘and consequently this country is at war with Germany’.

How does the world look when it’s at war? I went into the hallway and peeped through the different colours of glass in the front door. The garden looked a picture of peace and beauty in every shade.

The village was thought safer than my city, so I didn’t go home. The family welcomed evacuees from Gateshead – a girl called Jenny and a family. The adults had their own concerns, and we children were left to amuse ourselves.

We walked the fields, refreshing ourselves from a spring, drinking from a heavy metal cup hanging on a chain. We helped little Robert buy cigarettes from a slot machine for his Dad’s birthday – for two pence he got five woodbines in a paper packet. At Bedale’s flea-pit cinema we watched Shirley Temple in Animal Crackers — fourpence was the price of entry.

For the family the war must have nullified most of their growing and selling efforts of the season, but the adults gave little outward sign that their livelihoods were under threat. They fed us, loved us, played endless games, and I don’t suppose it occurred to us to say thank you very often.

The village school had to cope with a hundred or so boys and girls, split in two classes, aged five to thirteen. The head, Miss Dodds, Imposed her authority by tongue and ruler. The tongue was feared the more, for the sharp pain on one’s knuckles quickly passes, but her verbal drubbings must still re-echo in memories down the years. Her methods did wonders for my arithmetic, hitherto a weak point.

One morning a girl called Carol kept her coat on instead of taking her place. ‘Today’ said Miss Dodds, ‘Carol is fourteen, so it’s time for her to leave school. Say goodbye and wish her well.’ And out she went.

Besides classroom subjects, we had gardening in the school grounds, country dancing in the playground, and for nature study were encouraged to collect all the different wildflowers we could —not something encouraged today!

Miss Dodds read us the story of a medical missionary who devoted his life to the work. ‘Now’, she said, ‘What word describes the way he lived his life?’ After much prodding we got the answer ‘self-sacrifice’. I never forgot that message, which shows her teaching was effective.

There were no exercise books so we were given slates. Having received sixpence for a reason I don’t recall, I bought two exercise books for myself from Mr Calvert’s shop at 1d each and splurged the other 3d on nougat and chocolate.

Gran was very cross. ‘Fancy spending all your money at once like that! You must learn to be provident! You won’t have any pocket money for two weeks.’

This seemed unfair, and the lesson learned was riot to tell grown-ups what I was doing. Years later I found that Gran’s father was drowned aged 39, and to keep the family together his widow ran a shop from home. No wonder she disliked spendthrifts.

Roseleigh’s parlour was a holy of holies, and I found there an old birthday book which furthered my lifelong interest in family history. Also I discovered a children’s book containing illustrated stories using Edward VII and Alexandra as characters, and not hesitating to cite her notorious lateness, and Edward’s irritation. That royals were parodied at that period surprised me.

Reading a Rupert Annual by an upstairs sash window, I attempted to dose the window but trapped my fingers. Gran didn’t hear my cries, but drumming on the floor with my feet soon had her coming upstairs grumbling about my misbehaviour. Once she saw the reason, she was kindness itself. At Christmas I returned home, but those six months stay vividly in my memory.