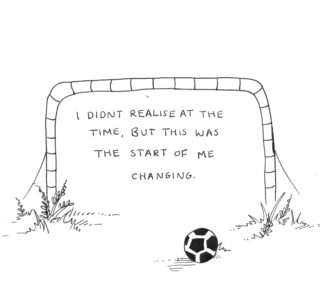 At the age of 14 I was diagnosed with depression. At my worst I was self-harming deeply every day, I was suicidal and could see no future. The build up to my GCSEs were excruciating, the constant reminder from teachers that the exams where coming up and that it would define the rest of your life. When people mentioned the future, even a week ahead I couldn’t think about it, it was literally a black void the anxiety that would build up as well as the anger was so frightening. While this was going on I started to be bullied because I was the weird kid in the corner crying ‘for no reason’ and was told to kill myself. Teachers would see me in the corridor and turn and walk in the opposite direction because they would rather deal with the student behaving badly then the student crying. I remember during a PE lesson (I loved PE and all things sport) just snapping and leaving the lesson and sat the in shower area (they were not on) and feeling completely and utterly worthless, useless and hopeless.

As I mentioned I always liked sport- Football being my main sport. I was playing at quite a high level but struggled as I couldn’t deal with the pressure. I decided to start coaching football. Fast forward a couple of years and I was coaching a couple of football teams, had completed my level 1 in coaching football and I really enjoyed it. It wasn’t easy, there would be mornings/evenings when all I wanted to do was sleep but the thought of the team waiting for me gave me the motivation to keep going. I was then selected to represent Bedfordshire at a 5 day residential FA leadership award. The 5 days were so hard, it was the first time I had been away from home, I didn’t know anyone and I was still struggling with life. I didn’t realise at the time but this was the start of me changing. People liked me, people found me funny, they knew some of my past but they didn’t care, they took me for me.

I started getting into more and more volunteering  and started setting up my own projects for young people to attend, and later got my level 2 in coaching football and was Bedfordshire’s Young person of the Year.

It’s important to note that I was having therapy and taking anti-depressants at the time this was all going on.

Fast forward again a few years and I was lucky enough to go on a 7 day residential Leadership and management course through the rotary club. This involved outside water sports and challenges. If I thought the 5 day residential was hard I was wrong! It pushed me to my limits both physical and mentally. I wanted the week to be over but as soon as it was I missed it. I started to realise that I had not allowed myself to appreciate enjoying something. I had become so use to feeling like rubbish that when I enjoyed something I would push it to the back of my mind and concentrate on the ‘bad’ stuff. I often think about that week and would love to go back and do it again.

In 2012 I won a national award through Vinspired- bringing communities together.

I now work for Hertfordshire County Council – a job I am proud of. A job I wouldn’t have if I had not volunteered.

Advice I would give a young person. There is life outside of school, if I had not started volunteering and met people outside of school I dread to think where I would be now. Volunteering is also a good way to find out what other interests you have and to create the person you want to be.

If you need therapy or counselling be prepared to feel like rubbish after a session but don’t give up its may take a little while but it does help. If you need to start taking medication such as anti-depressants don’t give up if the some tablets don’t help you, it can take a couple of tries before getting the right medication.