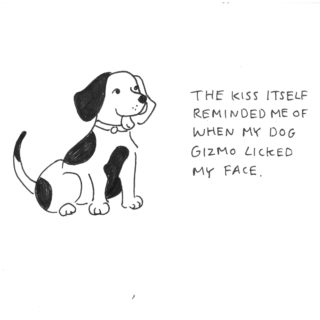 The music was playing in the background and everyone was laughing, drinking and flirting. I felt a little bit out of my depth, so the truth be told.  I was 16, insecure and I felt a bit drab so when 17-year-old Tom Howler asked me if I wanted to go for a walk, I was incredibly flattered.  It wasn’t really a walk though, more of a stroll and we ended up stopping at a wall near a chicken shed.  The farmhouse we were partying at belonged to the Wilsons and they lived across the road from us; us being the Campbell family.

It was getting quite dark despite the lights flashing from where the party was coming from, but I could see Tom’s outline. He was tall and manly, I felt very compact standing in front of him and kind of protected even though as far as Tom was concerned, I was just the older sister of Adam and Nick Campbell (my brothers, obviously) who Tom played cricket with regularly.  I was very naïve at 16 and looking back I realise how desperate I was to want that individual male attention even from a boy I didn’t fancy.  I fancied Tom’s friend Pete Channel, but Pete was gorgeous and was never going to look twice at me.  I remember him having the loveliest smile, he had dimples and I think I melted into them.

Anyway, back to Tom, here we were away from the party where everyone was still drinking and having fun and I was about to have my first snog (we used that term then – it was the 90’s for goodness sake). Tom gently pulled me against the wall.  I can’t remember much about this wall apart from the fact I was leaning against it when Tom kissed me and if I am honest it was probably the most pleasant part of the kissing experience.  The wall was my safety net; it stopped me from falling backwards when Tom tried to stick his tongue down my throat.  I kissed Tom back; to be polite, but the kiss itself reminded me of when my dog Gizmo licked my face and probably even after he had licked his testicles.  Gizmo I am talking about here; not Tom’s kiss, although I wasn’t exactly blown away by it.  I didn’t get butterflies in my stomach or anything, but my face felt like it had a shower from the slobber.  Every cloud and all that.

The kiss didn’t end there though, there was more to come as Tom tried to put his hand under my top. I pushed his hand away, of course, and he asked me what I wanted.  At the time I wanted a towel as I could feel his saliva all over my chin and cheeks but asking for that seemed rude, so I told him I wanted to go back to the party.

The next day I was in a whirl, I felt ever so grown up. I had had my first kiss and, ok, it was more of a face lick, but tongues were involved, and it was a starting point for my kissing life skill.  Growing up, I had always been told it is sometimes best to start at the bottom and then work your way up – well I certainly did when it came to kissing.  I am 40 years old now and my husband says I kiss like a movie star…Or is it that I kiss like I am in the movies…?  Tomato, tomarto 😊.