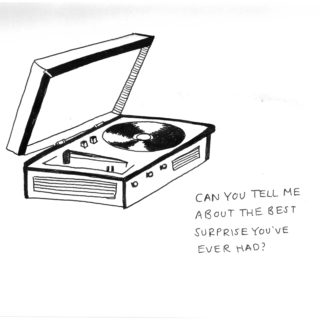 It came to me earlier today, as I travelled to meet my brother. I would ask if I could interview him and tell his story, in his words.

He’s in his forties, lives in supported living and was diagnosed with mild to moderate learning difficulties and an ASD when he was 31. He would not be able to write this story…

“Yes please, Becky, I would love that!”

I began by asking him which were the most important events in his life, the answers emerged, with little prompting.

Such clarity and simplicity, life-events which had been the worries, preoccupations, hurt and frustrations for all of us close to him, responsible for his care, for so many years.

His positive outlook and personal pride in his achievements was extremely moving.

His perspective erased the worries and angst I’d experienced during his transition from living with Mum to supported living.

“What is the most important event in your life?”

“Can you tell me about the best surprise you ever had?”

” It was my record player from the staff at Christmas.”

“And what about family surprises? Do you remember any of them? Which were your favourites?”

“Mummy’s birthday meal at Café Rouge. We all went to meet her. It was lovely.”

“Were there any other Holidays you enjoyed?”

“Yes, a long time ago I went to Devon with Mummy”.

“Which story would you like to talk about today?”

“About me getting my independence and my flat.”

“Ok, so who are the main people in your story?”

“How does your story begin?”

“Erm… it was when you asked me, ‘What would your life to be like?’”

“Were there any difficult times for you?”

“Yes, when I was in the assessment centre for assessment and treatment. I couldn’t make any choices. It was stressful.”[2] I had to take medicine, but it was for my own good, so I wouldn’t feel so much stress.”

“Yes, it was messy and there were things on the floor. It was stressful.”

“Yes, I used to have a bike of my own and I used to cycle down the road and take my bike on the Lee Valley, along the river and into Rye House. Sometimes I would go to visit my Dad for a nice meal and eat at his home. He would cook me spaghetti”.

“Before you found the flat you are living in now, you had a flat in Buntingford. Why was that difficult for you?”

“When you found a flat that you were happy with, how did it affect you?”

“It makes me mature, and makes me more like a man.”

“How does it make you more mature?”

“How does this story end for you?”

“Thank you very much Sam, Agnes, Liz, I’ve enjoyed it, I’m staying in my flat and I’m going to enjoy it.”

“What do you think would be a good title for this story?”

“Can you help me with that please, Becky?”

I agreed to think about a title and the interview was brought to a close.

Most carers will be familiar with the stresses of transition, without going into detail.

It was a relief to hear that the anguish he and we had experienced; the pain and guilt we’d experienced on his behalf had not affected his ability to enjoy life and remain positive. He was no longer tortured by our complex, painful worries, concerns, nor any desire to blame much less our own guilt.

I looked at him, across the chequered table in the global coffee shop. He had survived and flourished.

Hearing his perspective, in his own words was healing. It was a privilege to hear his story, in his words, his gratitude and to hear news of his forthcoming art exhibition.

I felt humbled when he shared that I’d been the catalyst for his push to leave home, I’d forgotten. He’d left me in no doubt that he was happy with his decision.

Any previous anger I’d experienced at dealing with professionals who kept telling me I was not his ‘primary caregiver’ during his transition dissipated – the anger too at those who suggested I had tried to influence his requests because I was his sister. He’d dictated his wishes to me. I’d written them so he could copy them. The copied letter was dismissed because I may have influenced its content.

For the first time I felt able to tell him that I had worked hard to buy a house so that he could live with me one day, but when I had found out he did not want to be with family and he wanted to live independently, I had tried to help him achieve that. He did not know that I felt I’d failed because it did not happen immediately.

My house was sold 15 years ago after he’d found a placement, I trained to teach and have worked part-time for many years. He tactfully reminds me it’s time sort my life out. (I’ve never had children or been married because of other more pressing family commitments. Now I am too old to have children.) He asks “What about Andy, are you still living with Andy?” Andy is my partner. “Yes, I reply, his family were not happy at first, but now they are happier and sometimes we meet and talk”. “I need to lose weight, do my exercises, so I can recover from my back injury which happened when I was helping Mum to get out and about with a wheelchair”.

Liberated by what he has shared, I tell him about a conversation had with our father a few days previously.

“The other day, I asked Dad ‘Can you name three nice things that Mum did for you when you first met?’”

My brother listens intently as I ask “Can you guess what they might be?” He replies “I don’t know”.

“Well, the first thing that Dad said was 3 lovely children – you, me and Anne. Then Dad told me about three more lovely things, that Mum knitted him a cream sweater that he liked it very much. That he was happy when she said ‘Hello’ to him the day after they first met, because he understood it showed that she liked him. He added that she was very kind because she phoned up about a job for him when he was trying to find work and it was difficult for him”.

I am reminded that I had been a catalyst for him wanting to leave home when I asked him how he wanted his life to be.

It’s a nudge to get my own life in order too, reminding me to following my dreams, mad as they may seem to others, perhaps find some new dreams!

The interview enables me to tell him I’d imagined we would have had a life together and he would have lived with me in the house I’d bought. I can tell him again that I am happy that he has finally got what he wanted. I, too, am relieved that he doesn’t have to live with family.

I tell him, in simple terms he can understand, that I need to keep piecing my life together and look after myself, he is well catered for. I’d sold my house years previously, lived off the proceeds and worked part-time in FE for over a decade. It is time for me to explore a freelance writing career, perhaps even produce some adult literacy training, activities and literature – its early days. The lesson is never over with him, he is my teacher… the roles have been reversed.

[2] The challenges associated with transition can lead to mental breakdown, not just for the client.