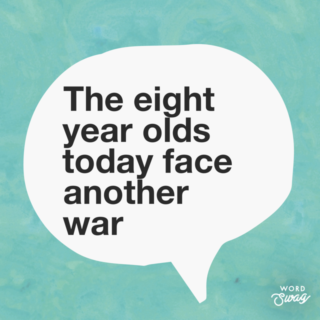 The day war was announced meant little to me.   Brought up on a diet of Toytown with the Mayor, Mr Growser and Larry the Lamb, my juvenile imagination couldn’t grasp the importance or enormity of it.     It wasn’t until diggers started to cut large ‘Vs’ into the outskirts of Moat Park to stop German tanks, that I realised that life was changing, and not for the better.     Then traffic lights were fitted with hoods and cars and lorries were also hooded to cut down light which might attract the enemy.   Curtains in the house were backed with black material and I was shifted out of my bedroom to sleep in a metal Morrison shelter which was erected in the living room and by 1940 sleep was interrupted by enemy bombers flying over Maidstone to bomb London.   Mum slept under the stairs and my brother, convinced in his own invincibility,   continued to sleep in his own bed.     Dad had tunnel vision and wasn’t called up, but he had to act as a stretcher bearer at the West Kent General Hospital.

We kids were entertained by dog fights – Spitfires and Hurricanes versus Fokke Wolfe – during the day and, because Moat Park housed an Anti Aircraft battery, there was plenty of shrapnel to be collected.   Because many schools had been closed for use as Casualty Clearing Stations, education was restricted to two days a week which suited us down to the ground. But it wasn’t until August 1940 that I witnessed an event that showed the true nature of war. The bombing of Detling aerodrome.   At least 40 Stuka bombers, ostensibly heading for the Capital, suddenly took a right turn and knocked hell out of Detling.   Estimates of those killed vary between 30 & 40, some of which were civilians.   I saw them turn towards the aerodrome and heard the explosions.

My parents didn’t speak of it in front of me, but my friends were full of the details.   Maidstone suffered some bombing but obviously nothing could compare with the subsequent devastation London experienced.   Suddenly the fun of watching dog fights paled and when the sirens went, so did we – into the shelters.     Then the London blitz began and, night after night one could see, from forty miles distant, the sky lit up with an orange glow.

We were fortunate in a way that, although the flight path to London went over our part of the world, we didn’t suffer bombing to any major extent.   This was due principally to the fact that Herman Goring, the head of the Luftwaffe, had set his sights on living in the picturesque Leeds Castle when they’d secured victory over Britain and had ordered that no bombs should be dropped in its vicinity.   It did work, to a certain extent, but several bombs were dropped some two or three miles beyond it.

So, as an eight year old, my life revolved around the war.   It was noisy, scary and marked by food shortages.   The eight year olds today face another war.     Silent and deadly.     Schools closed, gatherings banned, sport cancelled and self isolation and lockdown a fact of life.     The eight year old cannot play with anyone outside his immediate family – family dogs have never had it so good!

In 1940, if death or injury was coming our way, we saw and heard it before we were hit.

Eighty years later there is little warning – a cough, a temperature and a sore throat – and you have to ask, what do the children make of it.     I wonder….