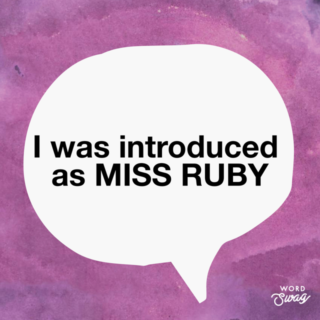 I arrived at London’s Regents Park and was greeted by one of the show Producers for LOVE ON A SATURDAY NIGHT which was a brand-new television show for ITV. The Producer explained the format of the day as I had been selected as one of three female contestants. We were all going to be taken on a date by a gentleman called Brad and the twist of the date was that each of us girls would have our faces and hair covered fully by a plastic mask. Brad had the luxury of not having to wear one. My mask was bright red. I was introduced as MISS RUBY; not quite the stage name I had in mind for my career in television but beggars cannot be choosers.

My date activity with Brad was to feed the ducks. The weather was beautiful that spring day in early May and I was feeling a little self-conscious under the plastic because through my eye holes I could see children stopping their games to stare at me. The camera crew followed Brad and I to the lake and we began throwing small pieces of bread out into the water. There were no ducks of course but this was for telly, so I knew it was a case of illusion.

I did not fancy Brad and I was sure the feeling was mutual and, despite being handsome, his personality was as dull as dish water. We struggled with conversation and Tom, the Researcher, requested we liven things up by asking each other questions.

The cameras rolled and looking at Brad through my plastic I asked the first thing that popped into my head,

“If you were a flower, what type of flower do you think you’d be?”

“That’s a rather stupid question” he mocked “What type of flower do YOU think I’d be?”

The cameras stopped filming and I was taken away so Brad could go on his next date with MISS SAPHIRE. I did not see Brad again until we were filming in front of a live studio audience.

In the studio Brad had to decide which girl he was going to choose to take on an all-expenses paid holiday and, to cut a long story short, Brad did not choose me. I was far too crazy for him and my questions were ridiculous, is what he told TV host Davina McCall. My television debut came to an end and the finale for me was revealing my face to Brad. I did this accordingly and once the mask was off; I saw that Brad’s face was bright red. I gave him my best smile, a peck on the cheek, I hugged Davina (of course) and I walked off set where the crew were giving me a quiet cheer.

I did not find love on Saturday night, but I embraced being Miss Ruby and going by Brad’s reaction Miss Ruby was contagious.