Friday Night is not alright! 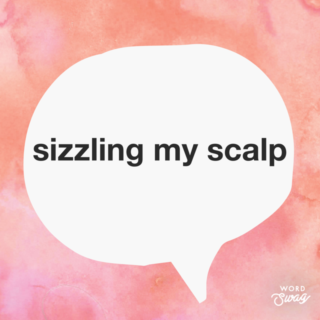 The sickeningly pink plastic hairbrush sat on the overstuffed vinyl pouffe and there by it’s side and plugged in ready at the wall, it’s zebra striped lead twisting this way and that waited the cream coloured morphy richards scalp – burner!

Friday was always bath and hair wash and toenail (only if needed though) night in our house.

My mum and dad co-parented us long before the term even existed. Sometimes it felt like I was living in a wooden painted weather house because as my mum went out my dad would come in; only he was the happy smiley sunshine and she the grumpy bad tempered rain. Most days they only met over a snatched cup of tea first thing in the morning and last thing at night.

So this was why he got to supervise Friday evenings!

The bath itself was no problem but dressed in clean vest and knickers I looked languidly at my fresh pyjamas and just wished that for once I could do without the ‘hair wash’.

‘Ready for you’ he shouted up the stairs and reluctantly I would creep downstairs as slowly as a tortoise on a hot day.

‘Up you pop sweetheart’

He lifted me onto the lemon Formica topped wooden kitchen table which he had prepared by wedging a brick under each of it’s far legs resulting in what he judged to be the best angle for jamming my head into the cracked red washing up bowl and underneath the massive metal taps. Of course I had to grip on to the sides of the table for dear life as the angle meant that I was constantly slipping backwards into the ancient butler sink.

I hated the smell of the vosene medicated shampoo that he smothered my head in and the unbearable pain as it stung my eyes because he was always over generous with the gloopy green foul smelling liquid.

His large firm hands massaged my head, shoving my neck backwards into the sink for what seemed like hours and then on went the water. Fire hot on the left and ice cold on the right and it felt like I was drowning as I spluttered and struggled for air! He never seemed to notice though as he happily whistled ‘How much is that doggy in the window?’ – one of my favourite songs.

‘Right-o then we’re ready for your finishing touch. This’ll bring a shine to your life ‘ he laughed as he tipped half a bottle of malt pickling vinegar over my head.

‘Up you jump!’ he sang as he wound the well worn candy stripe towel around my head and lifted me and my soggy vest from the torture table but worse was yet to come!

Once again ever so slowly I crept into the living room.

‘Come on slow-coach!’ he trilled as he made a leap for me from his high backed chair.

‘make yourself nice and comfy now’ and as I dropped defeatedly onto the plump pouffe he wedged my shoulders between his knees and so it began!

One strong hand ripping out my hair with the evil brush, the other sizzling my scalp with the even more evil hairdryer!

What seemed like days later he would stop give me a great big bear hug, twist me around to face him and make a grab for one of my feet, holding it firmly with one hand as I fell backwards into the pouffe. His other hand dug deeply into his back pocket and extracted the ever so shiny nail – scissors he used to ‘trim’ my toenails – whether they needed it or not! He often drew blood when he accidentally snipped part of my toe as well as the nail! When both feet had been attacked he released his grip, gave my newly washed hair a playful scrunch and repeated the whole sequence with my brother!

Thinking back though if we hated Friday nights then I bet my poor exhausted dad who worked long hours as a constructional engineer hated them even more, especially if he was booked in for overtime on the Saturday!