In Search of Ghosts 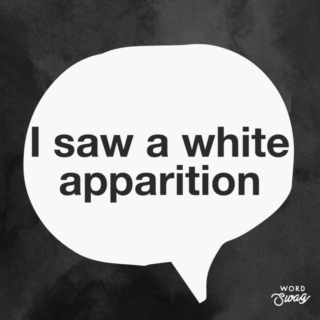 It was just after the war and I was 17 years old and had just got my licence to drive. My father was a family doctor and we lived in St Albans. One summer evening after dinner I suddenly suggested that we go looking for ghosts. I had visited Ayot St. Lawrence some time before and had been intrigued by the ruins of the church that lay in the centre of that quietly isolated Hertfordshire village which had been the home of playwright Bernard Shaw.

I also knew that that the village was noted for its haunting. It was listed in the Doomsday Book and was on the route that pilgrims took when visiting St Albans Abbey. The village inn was known to be haunted by a monk who had hanged himself there. In fact there was a poem that recounted a version of this tragedy.

“A monk has ridden as he fled from the mob
Of howling villains who fear no God
They slung him up to a beam in the bar
declaring he shouldn’t have ridden so far.”

The old church itself had been demolished in the 18th century by Sir Lionel Lye because it spoiled the view from the new home he was building in a meadow behind. And I had heard that if you do go ghost hunting in Ayot St. Lawrence be sure to avoid Hollowdane Spring in Brimstone Wood where a witch was burned to death. So, obviously, if we were to seek ghosts, Ayot was the place to go.

My sister Mary and her friend Joan were in enthusiastic agreement. My other sister, Anne, and my parents decided not to accompany us. Before we left, I suggested we stop off at a pub on the way – in those days drinking and driving was not frowned on as it is today.

And so we set off. We duly stopped for a pint at a pub then continued on through the darkened countryside, the lanes getting increasingly narrow, a half moon leading us ever more deeply into quiet and sleeping farmland.

When we reached the village there was no sign of life. All was quiet. Even the inn was silent. The half moon provided the only fitful light. I parked the car on the road in front of the ruins. A path crossed a ditch and led up to the church. We started up the path –Joan first, then my sister Mary and, finally, I took up the rear. Suddenly, in the gloom ahead, I saw a white apparition, seeming to undulate from the ruins, coming towards us. We stopped, frozen into stillness, our eyes staring straight ahead, fearful. I turned to retreat back down the path to the road and to the safety of the car. And then, ahead of me, cutting off our escape, another apparition rose up out of the ditch, seeming to divide, to hover, luminous in the intensity of its evil spirit. And so we stood, seemingly unable to move, transfixed.

Then I heard laughter and my father appeared from behind a sheet, rising up from where he had crouched hidden in the ditch. My sister, Anne, unwilling to hold the suspense any longer and removing the sheet she had used to assume her ghostly being, appeared out of the gloom at the entrance to the ruined church. And we trembled in relief.

Afterwards it became clear what had happened. Knowing that we were stopping at a pub, they had raced ahead of us and set up their ghostly act in anticipation of our arrival. They had won the day and created a memory that would last a lifetime.