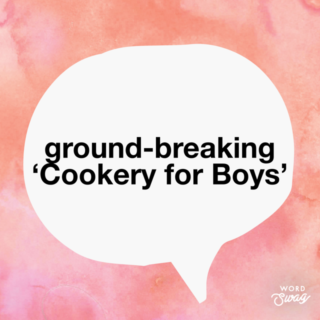 In 1973, feminism had made little impact on the curriculum at Hornchurch Grammar School. When it came to practical subjects, the girls did cookery and needlework, while the boys did woodwork and metalwork. That is the way it was, and that is the way it always had been.

The only room for flexibility anywhere in the curriculum was in ‘General Studies’ – a two- hour period each week when, as sixth formers, we were able to study something outside the A-Level syllabus. Sometimes we had external speakers; sometimes there were discussions of events in the news; and sometimes there were sessions on topics that we may need to know about in adult life, such as personal finance. So it was in the General Studies slot that it was announced that there was to be a ground-breaking ‘Cookery for Boys’ option.

The course was to last six weeks, and we were told that it would be a very basic introduction, aimed at providing some rudimentary skills to those of us who may be moving away to university in a year or so and having to fend for ourselves. I was one of a dozen or so boys to sign up.

It was with some trepidation that we lined up outside the unchartered territory of the Domestic Science block, aprons in hand, waiting for the first class to begin. This feeling was heightened by the fact that, although the Domestic Science block was not on any main thoroughfare through the school, half the girls in our year seemed to have found an excuse to walk past at that precise moment in order to point at us and laugh.

Our teacher was Mrs Mortimer, the senior Domestic Science teacher – a pleasant woman with a reputation for having a no-nonsense approach. She seemed slightly hesitant when she gathered us together, and it was only much later that it occurred to me that, despite her years of teaching experience, having a group of teenage boys in her domain was as unfamiliar to her as cookery was to us.

Once she had shown us around the cookery room, Mrs Mortimer announced that the task for our first lesson was to cook Eggs Mornay. I don’t know why she had chosen this particular dish. Maybe it was Lesson One on all her courses, or maybe she thought it would introduce us to some basic techniques that would be useful in future. Whatever her reasoning, it is fair to say that this is not what I had been expecting. I had never heard of Eggs Mornay, let alone eaten it – Eggs Boiled was more what I had in mind for the first lesson. And if the open-mouthed bewilderment of my classmates was anything to go by, I was not alone. I began to wonder whether joining the course had been a rash decision.

In the event, it wasn’t so bad. I remember the weighing of the ingredients. I remember the mysterious alchemy of the roux, and the thickening of the sauce. I remember pouring the sauce over the eggs, and putting it in the oven. I remember taking it home in a Tupperware box, but I have no memory at all of me or any other member of my family actually eating my first dish – maybe it was safely buried in the garden, or rendered harmless in a controlled explosion.

To be fair to Mrs Mortimer, she did cover some more familiar dishes in subsequent weeks, such as egg and bacon flan (it wasn’t called quiche in the Seventies) and apple crumble. Then in the final week, she told us that we would be preparing Coq au Vin.

It so happened that on the day of the Coq au Vin, I had to stay at school to help with an evening event, as did my girlfriend, Jane. I asked whether it would be possible for Jane to come to the Domestic Science block after the lesson and share my Coq au Vin for dinner before our evening duties. I could almost see Mrs Mortimer’s mind racing to think of a reason why this would not be possible, but she could not come up with any plausible objection, and so this is what we did. The first meal I ever served up for a girlfriend was Coq au Vin in the romantic surroundings of the school cookery room. Jane later told me that Mrs Mortimer had carefully taken her aside on the previous day and urged her not to be too critical of my efforts – even if the dish was horrible.

So, was it successful – this first bold experiment in teaching cookery to boys?

I must admit that when I went to university the following year, I ate my fair share of baked beans, Vesta curries and instant mash, just like everybody else I knew.  However, I had gained sufficient confidence to think there was nothing to be too scared of in the kitchen, and when I made the effort, I was one of the more ambitious cooks among my contemporaries.  Over the years, I have grown to love cooking and taken pride in building up my repertoire, and Mrs Mortimer must take some of the credit for this.

One dish I have never been tempted to add to that repertoire, however, is Eggs Mornay.