My faith in mankind 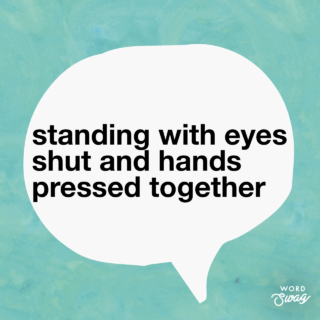 I was brought up without any religion and was not introduced to Christianity (or any other faith) until I went to school. Standing with eyes shut and hands pressed together (waiting for a present? a surprise? or a game to start?) it took a little while to get the message.

It all started off innocently enough though the stories were consistently odder than the ‘fairy’ stories and nursery rhymes I was already familiar with. Those were set in an obscure and yet indeterminate past. ‘Bible’ or Jesus stories seemed to be coming from a stranger place and time where people hadn’t even worked out how to make proper clothes or buttons yet. So at six I felt a bit sorry for them holding up their sheets and bits of cloth, without proper shoes, in a landscape of rocks. Their behaviour was also rather incomprehensible at times. Mostly the story was just how wonderful Jesus was and how he was such a nice man. He could make sick people well, the blind see and sad people happy and things like that. In fact he was the nicest man that ever lived – so far so good. As stories went, they were okay but less imaginative than talking cats and blackbirds in pies etc. I definitely preferred Nogin the Nog.

Then the tale turned rather nasty. Jesus got killed in a particularly gruesome fashion and disturbingly our teacher wasn’t telling it in the wide eyed, mock scary way that adults spoke about the deep, dark, forest and so on. Instead there was a certain amount of unnecessary lingering over the final sufferings of poor Mr Jesus. An attention to detail that even as a tot I seemed to recognise as rather unhealthy. Already made thoroughly uncomfortable by the grisliness of the execution, the bit about the vinegar soaked bath-sponge on a stick finished me off. It was my infant introduction to sadism.

But there was worse to come. The message of the story, when it finally got through to me was that, astoundingly, Jesus’s death was in some unclear way, all my fault, more than that, it was all of our faults. This was incomprehensible to me and, 60 years later I still find original sin a questionable concept to say the least. As a small child I wasn’t having it. Quite willing to accept that grown-ups generally knew more than me, this accusation seemed so unjust and capricious I had no choice but take it as a first definite proof of their fallibility. There and then I decided that religion was not for me. I had to wait a couple more years to discover that misanthropy could also be secular.

Mr Crane came to teach at our school. Already fairly unusual, just by virtue of being a male primary school teacher, he wore a black Italian suit, with a turtle neck, or sometimes a knitted tie, but never with the ubiquitous white or pale blue shirt of the era. On playground duty he smoked French cigarettes. Other days he would amuse himself playing jazz piano at lunch time in the music room. As long as we were quiet we were allowed to listen. He never attended the daily religious assembly. He was popular with pupils as, unlike other teachers, he would occasionally attempt conversation with us. One day in the music room he told us the plot of the novel ‘The Lord of the Flies’ which he thought a great work. He said that without adults to guide us we children would, like the boys on the fictional island, rapidly devolve into brutal, murderous, savages. As with the unfounded Jesus accusation I was seriously affronted though, of course, I could not articulate my outrage. If I could, I would have said “Speak for yourself mate.”  I was only eight but even so I could tell that his smirk made it more insulting. I didn’t know the word then but the word was supercilious.

Since then I’ve been continually surprised at the pervasiveness of pessimistic attitudes to mankind. It’s been a life’s work to counter the dismal philosophy. But I do wish I could have told Mr Crane about the real story of schoolboys marooned for a year on a desert island, South of Tonga in 1966. Unlike Golding’s fictional ‘savages’ and despite being Christians these boys cooperated, shared, kept a permanent fire, made a vegetable garden, stored rainwater, built a gym and a badminton court and created a successful method to resolve their differences. Significantly, after being rescued from the island they remained friends for life and had faith in mankind.