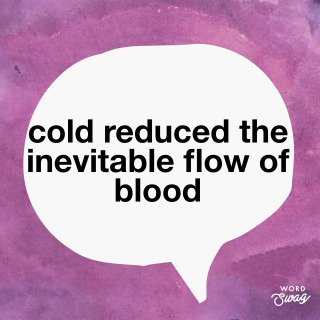 Content warning: This story contains details of wartime injuries which some readers may find upsetting.

My life has been marked by gastronomic highs and gastronomic lows. 1950 was definitely a low point. To my sorrow, the Army Chefs had not been trained to Michelin standard – or any other standard that would be recognised as Catering. It was always a matter of wonder that fewer Artillery Trainees did not die of malnutrition. For example, sausage, bacon and egg for breakfast sounded just the thing to give growing lads for breakfast. And it would be, if only they could have been cooked properly. Sausages cremated on one side and nude on the other, bacon given 30 seconds under a grill and eggs either runny or bullet hard, paint a picture of total inedibility.

The saving grace was the NAAFI. Sticky buns and drinkable tea filled the yawning gaps in our stomachs.  Thus the NAAFI became the Holy Grail, and I’m sure went a long way to perhaps saving my life! How?

It was freezing cold on that January morning and we’d been doing gun drill on the hard standing some 30 yards outside the Gun Sheds. A 25lb Field Gun is an awesome weapon to those used to a .303 rifle. and, with its ammunition limber is very weighty. Our ‘Instructor’ that day – and I use the term very loosely – was an Officer Cadet waiting to go for Officer Training and the white lapel tabs gave him an authority to which he was totally unsuited.    NAAFI time approached, and he gave the order to ‘Limber Up’. This entailed lifting the tail of the gun on to a connector on the limber.

I was in the front, pushing with the rest of the gun crew, and was holding on to a T Bar.
Our progress towards the Gun Shed was apparently too slow for our Instructor and he gave the order to “Run with the damned thing”. Ever willing to obey any orders we were given, we ran towards the Gun Shed opening. The speed we generated lifted me and the gunner of the left side of the T Bar off our feet and before the inevitable collision with the Shed Door I had to decide whether to cling on for dear life, or fall, risking being run over by both the limber and the gun wheels. I chose the former and struck the door with full force. Two things were in my favour. The door was clad in corrugated iron sheeting which meant only some of my fingers were crushed, and the fact my hands were so cold reduced the inevitable flow of blood!

I was carried to the Sick Bay where the backs of my fingers where they’d been flayed to the bone, were dressed. This accident had several results as far as my life in the Artillery was concerned. Firstly, my hands took an age to repair and I was sent into the Battery Office, where eventually I became Battery Clerk.  Around this time there were conflicts in Malaya and then in Korea. Many of the trainees were sent to these war zones and sadly, many did not return. And so, in a peculiar way, the accident could well have saved my life and I suppose I have to thank that NAAFI break for my current existence.

My hands?  I never became either a Concert Pianist or a virtuoso Violinist, but looking at them seventy one years on I can barely see any scars!