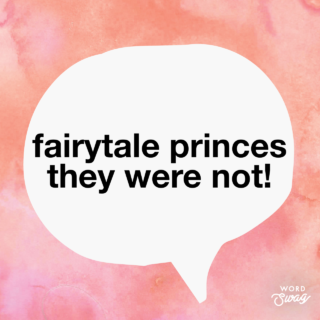 This is a tale about family, holidays and love in all its many shapes and forms.

Our family were holidaying in caravans in Prestatyn Wales for two weeks. On the first Sunday when we met on the sunny beach for breakfast my Aunty whispered, ‘Met a nice couple of lads last night said you would pop down to meet them about 3.00 this afternoon – alright?’

What could I say? I just nodded as my insides turned to blancmange. I was eighteen, had only just left an all girls school and knew nothing about boys other than what I’d read in magazines. So, I put on a skirt which barely covered my bum, wore too much copper-tone foundation and never let my Mum know where I was going!

They were sitting outside my Aunty’s caravan when I arrived. I guess they were nice enough but fairytale princes they were not! We chatted about the sun and the caravans and Bryn the shorter one said, ‘Lets go for a walk?’ We walked in the sunshine as he told me all about his farm where they bred horses in rural Wales. I loved horses and I loved his lyrical voice, everything he said sounded like a poem.

The boys were only at the camp for a week and so on the Saturday we said a tearful goodbye (his not mine!) and I promised to write. As the train pulled out of the station he shouted ‘Rwy’n dy garu di (I love you)’

No boy had ever said that to me before so I felt really pleased with myself and spent most of the following week with my dreamy Aunty talking about love and romance and fairytales as my Mum was much more interested in roast dinners and Bingo.

When I arrived home, there were two letters from him on the doormat with S.W.A.L.K. (sealed with a loving kiss) around the edge of the flap. He had written in both Welsh and English mentioning it was a good idea if I began learning his language as his Gran only spoke Welsh!

Unbeknown to me Aunty had asked him to stay in her flat in East London for the weekend in October so I joined them and I did tell my sulking Mum this time! We went to London which he hated! He couldn’t stand the noise and the crowds and loathed the tube.

He told me that in his village if you held hands you were as good as engaged and so I’d best arrange to visit his family. I began to feel a bit trapped and was really glad when he returned to Wales as, at eighteen, I was not ready for marriage or a boring life in rural Wales and gradually we stopped writing.

I did like him but still had a lot of growing up to do and needed to learn that princes, like love, come in many different shapes and forms and fairytales are best left in books!