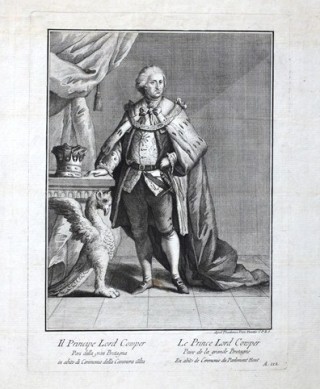 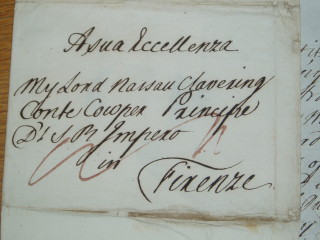 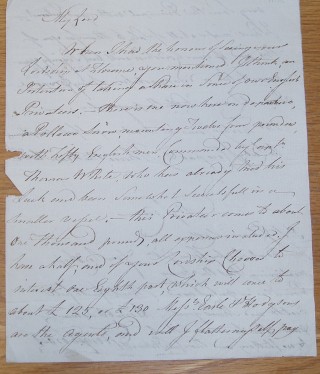 As was the case with many of his contemporaries, George Nassau Clavering-Cowper, in order to complete his education, undertook what was known as The Grand Tour. The purpose of this was to explore and understand the art and cultural history of Europe. But while most of these upper class young men would eventually return to England the third Earl Cowper never did. Being more or less financially independent, he had already started buying paintings in Rome and Naples before travelling on to Florence where he eventually settled for the remainder of his life.

Although art seems to have been his main interest, he did venture some of his capital elsewhere, and no doubt he had many opportunities to do so. In 1780 he bought shares in two privateers. Privateering, which was a kind of licensed piracy, was treated as an investment in much the same way as one might invest in, say, BP. The authorization, issued by the government, to attack and seize the cargo of enemy ships, was known as a letter of marque. The returns could be significant, but there was no guarantee of success. Fortunately, through a series of letters held at Hertfordshire Archives and Local Studies, we can trace the fortunes of the vessels Lord Cowper had an interest in.

There are twenty-four letters in all plus some inventories. A selection of these will be presented here with the full series available via a link at the bottom of the page. The story they tell falls roughly into four sections and begins in early 1780 with the offer of a share in one vessel: ‘The Tartar Polacca’

To listen to the audio clip click on ‘play’ on the bar below the portrait of Earl Cowper above.

‘When I had the honor of seeing your Lordship at Florence you mentioned, I think, an intention of taking a share in some of our English Privateers. There is one here now on departure a Polacco Snow, mounting twelve four pounders with fifty English men, commanded by Capt. Thomas White, who has already tried his luck and been somewhat successful in a smaller vessel. This Privateer comes to about one thousand pounds, all expenses included. I have a half, and if Your Lordship chooses to interest one-eighth part, which will come to about £125 or £130, Messrs Earl and Hodgson are the Agents, and will I flatter myself, pay very soon the principle with good interest. I shall make a bill of sale to them for you of this, and if your Lordship will but signify your approbation or disapprobation of my proposal, I can at leisure settle the payment.’ George Forbes, nd.
[HALS Ref: D/EP/F310/46/11]

By March the Earl’s interest in the venture is clearly growing with the acquisition of a second ship, The Royal Hibernian, to be re-named after the Earl.

‘I have according to your Lordships directions put you down for 1/8 share in the Privateer Tartar of 12 guns, commanded by Capt. Thomas White. When your Lordship receives the accounts, you may give a bill on England, at three months for the money, which will be about what I mentioned. There is no hurry for it. If you chose to have it insured in case of a loss, you may have it done in London, by Messrs Earl and Hodgson for about £6 the three hundred pounds a month. As we are obliged to apply for new Commissions, we must on such application, give in their names; therefore this must be the Tartar. I wrote last night to Mahon at my house, to give the name of The Earl Cowper a Privateer of 22 guns now about sailing, lately the Royal Hibernian. This is known to be the fastest sailor in the Straights, and last summer beat at running the squadron of Zibiques of Barcello. She is a Zibique and a very fine one. PS The Tartar sails tomorrow, in company with the Angelina of 26 guns, for the Levant. George Forbes, Leghorn, 6 Mar 1780.
[HALS Ref: D/EP/F310/46/1]