Events at Sea & The History of 'The Earl Cowper' 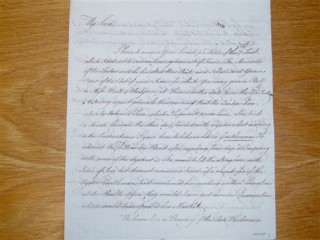 Life at sea was always going to be hard, uncertain and dangerous. So dangerous in fact that on one occasion some of the crew were driven to something approaching mutiny. However, there could also be lighter moments as the following letter shows.

To listen to the audio clip, click play on the bar below the letter.

‘My Dear Lord, I have received your letter of the 7th inst, which I did not do sooner having been out of town. The accounts of the Tartar will be finished this week and I shall send you a copy of your share, for which you may give a bill to Messrs Earl and Hodgson at 3 months from the 21st inst. A strong report prevails this morning that the Tartar has already taken a prize, which I hope will prove true. She took a small Corsican the other day, loaded with oysters, but according to the instructions I gave him to behave like a gentleman, he returned the poor fellow his boat after regaling his ships company with some of the oysters. The men told the story here with tears of joy, but it must remain a secret: for if the oyster gentleman had mentioned his meeting with a Privateer at the Health Office they would have put him in quarantine, which would have spoiled his market.

We have here a drawing of the Late Hibernia now Earl Cowper, which I shall get copied and send your Lordship. She is a perfect beauty: the painting contains part of her history, which as it is odd enough and may amuse your Lordship, I shall relate to you.

She was fitted out last summer on her last cruise. Had on board 150 men, but very few seamen. She was coming up here for cannon and powder. Of the last had but a barrel or two, of the first from 6 to 8 of different calibre, the rest were wood to make a show. She had not sailed above a few hours when she met with a French Privateer of 8 guns, 2 whereof were sixteen pounders and 2 Honritzers. The only way to take her was by boarding, which the crew were a little averse to; however Captain Barry who commanded, run her on board, many of his men being fresh water sailors disappeared, but the braver part succeeded in carrying the Frenchman of whom they killed and wounded about 30. We lost only 3 men. This Privateer saved the voyage to Leghorn, having furnished us completely with all kind of arms and ammunition. She was much smaller than ours but completely manned and superiorly fitted.

I expect every day to hear of the above vessel’s sailing from Mahon, when I shall send you a bill of sale to the amount of £300 for which you may then send me Bills at 3 months date on London.

When these two vessels are out, your Lordship will enjoy the pleasures of a chaise; it is really such, and there is a pleasing anxiety in it ­– I speak from experience. We have nothing new from England. The Fox Privateer of 16 guns after fighting the Serieuse a French Frigate of 32 guns for the space of 2 hours off Candia, sunk alongside her, she had about 24 men killed and wounded, the rest were saved and are now at the Lazaretto in Malta’.  George Forbes, Leghorn, 15 Mar 1780.
[HALS Ref: D/EP/F310/46/2]

By April ‘The Earl Cowper’ was preparing to sail. The ‘Tartar’ was by now already at sea, bound for the Levant, and hopefully, success.

‘Sir, I have received from Messrs Earl and Hodgson £165 in full of Your Lordships Share in the ‘Tartar’, Capt White. I received yesterday a letter from Messina acquainting me that he had passed there the 19th past on his way to the Levant where I make no doubt but he will be successful.

I have had accounts from Mahon that your namesake was to sail about this time, but my House had not received my order to change her name, however I am positive they must have arrived before her departure. It is probable she may call here for intelligence, and for some very fine cannon, which I have prepared for her, but as she may take something in coming up, it is not fair that Your Lordship should not have a share therein. I therefore send you enclosed a Declaration of your Concern, and when I have the regular amounts of what she stands, I shall send to Your Lordship a Bill of Sale form, and at that period it will be time enough to give me your Bills on London. P.S. Your lordship may have this sum insured at £5 or £6 per month per hundred by your agent here, should you not choose to risk the total loss or Capture, of which however I think there is little danger.’George Forbes, Leghorn, 3 Apr 1780
[HALS Ref: D/EP/F343/4]