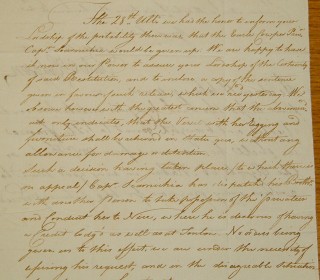 Audio clip of the letter being read by Ian Fisher 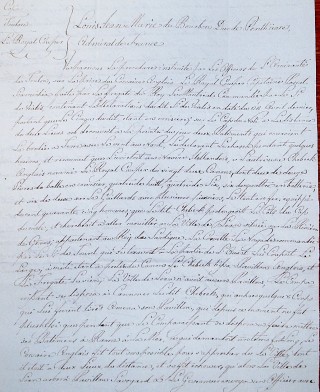 Letter to The Admiral of France
Hertfordshire Archives and Local Studies 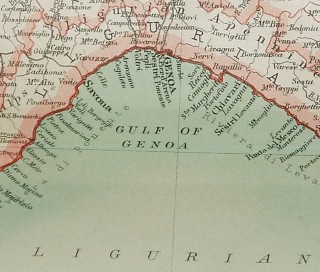 Part of the coast where the action took place. The cap de Noli and Cap Mele are shown as is the port of Loan (Now Loano)
The Citizens Atlas

It can only be hoped that Lord Cowper chose to insure his ships, as before the month was out things had started to go wrong.

The following letter, which contains some nautical and technical terms, has been translated from the original French; many thanks to Sue Flood for arranging this, and to Eleanor for undertaking a very difficult job.

In view of the proceedings conducted by the Admiralty Officials at Toulon concerning the capture of the English corsaire, Le Royal Cowper, captained by Pascal Scarnichio, by the King’s frigate Le Montreal, commanded by S[eigneur] de Vialis; containing the declarations of the said S[eigneur] de Vialis dated the (22) April last, showing that  Le (or Les) Cinque of the said (person ?) cruising on the Cape (Cap) de Noli, at a distance of two leagues, came across, at daybreak, two vessels which were tacking towards land, with the wind to the north.  The witness gave chase for several hours, and identified one of them as a Dutch ship, and the other an English chebeck*  called le Royal Cowper, with 22 cannons: two 12-pounders; four 8-pounders; four 6-pounders, six 4 [pounders] in a battery, and two 2-pounders on the forecastle with many [illegible], all in iron, manned by 145 men.

The said chebeck was continuing along the coast of the Cap de Mele looking to anchor at La Ville de Loan [or Soan] situated on the [?Genes] river and belonging to the King of Sardinia.  The corvette La Nayade, commanded by S[eigneur] de Tourel, which was on the west side, was cutting her off from the open sea.  At midday, being in range of the cannon, the chebeck raised English flags and the frigate raised theirs, La Ville de Loan had no flag.  The [Comparaissant] prepared to fire on the said chebeck, which, nearby some rounds, which were fired on it, lowered its flag, which from that moment was only raised again when the [Comparaissant] prepared to put his rowing boats to sea, which [called for a good long …………?]

The English corsair did everything possible to reach the town, which was about two leagues distant, and failed, when La Ville de Loan displayed a Savoy[ard] flag and the Governer sent an officer with a protest, to which the witness replied that he should not change his opinion concerning the legitimacy of his enterprise, set to sea again and sailed to the said port of Toulon.

The said declarations being verified in the presence of the named Jacques Bertel and Joseph Desmos, the Seal was affixed to the Reporton the said enterprise.  The interrogations of Jean Roche, Guillaume Marchaise, Pierre Antoine Pretto, Francois Nausse and Francois Pons, all members of the crew of the said English chebeck, which show that when the frigate seized the said corsair, it was no more than a pistol’s range from land; an English coin found aboard the said corsair; and finally, an inventory of the contents of the said seized vessel.  All of this has been taken into consideration.

We by virtue of the power given to us by our said Admiral, are agreed on the full release of the said English chebeck Le Royal Cowper, of its arms and equipment, to the said Captain Pascal Scarnichia or to its owners.  Consequently we order that all should be returned and restored that which the [Gardiens] confiscated, and the agents who were imprisoned should be discharged.  We command our Lieutenant General and all other officers of the said Admiralty Base in Toulon [which will belong to it?] to put their hands to the execution of this present command, and we order the [huissier means bailiff, but in French more a court official than the modern English usage] Bailiff or Sergeant, upon this request, to [do all that is necessary] for which we give him the power.

By July the ‘Earl Cowper’ has been released, but without the compensation previously promised by the French. All hopes of a prize rested, for the present, on ‘The Tartar.’

Letter (to Florence) confirming the release of the ‘Earl Cowper’, privateer, but without any allowance for damage:

To listen to the audio clip, click play on the bar below the photo of the letter at the top of the page.

‘The 28th Ult, we had the honor to inform your Lordship of the probability there was, that the Earl Cowper Privateer, Capt Scarnichia would be given up: we are happy to have it now in our power to assure your Lordship of the certainty of said restitution, and to enclose a copy of the sentence given in favour of such release, which we knew yesterday. We observe however with the greatest concern that the abovementioned act only indicates that the vessel with her rigging and furniture shall be returned in status quo, without any allowance for damage or detention.

Such a decision having taken place, to which there is no appeal, Captain Scarnicchia has dispatched his brother…to take possession of the privateer and conduct her to Nice, where he is desirous of having a credit lodged as well as at Toulon. No orders being given to this effect, we are now under the necessity of refusing his request, and in the disagreeable position of not knowing how to act.

The Tartar, Captain White, is still in the Levant as unfortunate as ever! We shall experience infinite pleasure in conveying to your Lordship the so much wished for tidings of his success’ Signed Earl and Hodgson, Leghorn, 10 Jul 1780 [HALS Ref: D/EP/F 310/39/12]

However, the subsequent capture of two French ships provided only limited success, and prior to this there was worrying news for His Lordship.

‘We have the pleasure to assure your lordship the account of Mr. Uding transmitted you of the capture of a neutral vessel by the Tartar, Capt. White, was premature. He returned here on Tuesday to our great mortification unaccompanied. However during his six months cruise he took two empty French vessels, which he carried into Tripoli; one of them he sold for about £700 this currency, the amount he has brought with him in bills on this place’

The letter goes on to state that the other ship has been left to sell through a merchant, and then continues with further bad news:

‘Though a fatality seems to have attended poor White on his last cruise, yet his conduct has been so evidently clever that it is a pity that he should remain idle.’

This last incident only brings further problems for although at first the crew seemed happy to sail again with Captain White, on reflection, they obviously thought better of it. A post script to the same letter reads:

‘Captain White has just now sent a note signifying that his men have altered their minds and do not incline to proceed on another cruise on [account] the ill fortune which has hitherto attended them’ Earl and Hodgson 21 Jul 1780 [HALS Ref: D/EP/F 310/39/13].

It should be explained that the authorization (Letter of Marque) to attack enemy ships meant that, in the event of the capture of a privateer, the crew would be treated as prisoners of war. However to attack a neutral vessel was piracy: a capital offence. This might also have reflected badly on the Earl’s reputation and he would probably have been mightily relieved when the report turned out to be false.

In view of the above there was, of course, a further delay.

‘My Lord, By our last Respects your Lordship will have seen Captain White’s sentiments in regard to fitting out the Tartar for another cruise, which arose from his fear of not being able to find a proper crew on account of the number of Privateers in Port, on further consideration he is in hopes to superate all these difficulties, and is determined to try his fortune once more for a cruise of four or six months as the owners may think proper. We hope this Resolution will meet with your approbation, and in due time we shall we shall inform your Lordship of our proceedings’. Earl and Hodgson 4 Sep 1780 [HALS Ref: D/EP/F 310/39/14]

This meant that it was October before Captain White was re-provisioned and back at sea.

‘My Lord, Our last informed your Lordship the departure of Captain White of whom we have since had no intelligence and his accounts being all discharged we lose no time inlaying before your Lordship a copy of his outfit, the balance of which is £4016 in our favour, and your Lordships account has debt of £502 which you will be pleased to reimburse us as may be most convenient.

By Letters just received from Civitavecchia we find a French Tartan [a small one masted vessel with a large lateen sail and a foresail] was put in there by stress of weather bound from Tunis for Marseilles laden with wool and Pot Ash, and Captain White has been very unlucky not to fall in with it. As all advices from the Levant agree that the French carry on a great trade without any fear of English Cruizers we hope she will meet with success to repay us for our trouble. We are respectfully my Lord, your Lordships most obedient servants’.  Earle and Hodgson 18 Oct 1780 [HALS Ref: D/EP/F/310/39/15]

Meanwhile the ‘Earl Cowper’ having been released has arrived at Leghorn, and after some delay is being fitted out for another voyage.

‘You will have heard of the release of your namesake; I hope she is by this time at Leghorn. The agent and other owners at Leghorn have been strangely remiss in neither sending credit, nor instructions for fitting her out. I have however sent both to Messrs Earl & Hodgson and hope they will lose no time in putting to sea. If she gets as much honor and profit as [The Fame] has done, she will make up for all. I am in hopes that the Court in Turin will oblige the French Canons to refund our loss in provisions and stores. I flatter myself that the Tartar will now make a figure; she cannot have a better man than the present Commander’.George Forbes, Welbeck Street, London, 10 Nov 1780 [HALS Ref: D/EP/F310/46/6]

By early 1781, the ‘Earl Cowper’ is ready to sail once more, and those concerned are clearly anxious for success.

’I join with your Lordship in opinion that there will be good pickings for the privateers as soon as Letters of Marque are taken out for them against the Dutch, 18 or 20 ships are expected at this point from the Levant and west, most of them rich, Scarnichia went down to Mahon, but by this I imagine he is at sea again and I hope will meet with good success’. Francis Jermy, Jan 15 1781 [HALS Ref: D/EP/F/310/39/17A]

Would Lord Cowper see a return on his investment at last?