The Fate of The Two Privateers 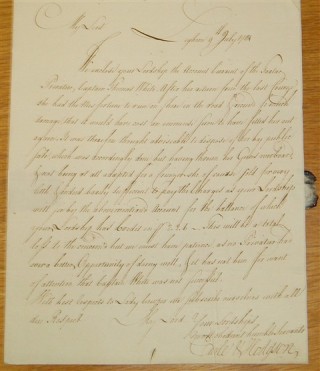 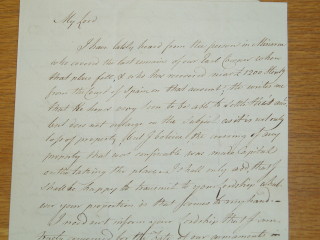 Loss of the 'Earl Cowper'
Hertfordshire Archives and Local Studies

Shortly before the departure of the ‘Earl Cowper’, George Forbes had written: ‘I hope she will now fully repay us for our repeated disappointments’. In fact both ships had failed to live up to expectations. Although one was probably unlucky to have been captured by the French, was bad luck alone the reason that the “Tartar” had failed to take a significant prize? The next we hear of Captain White is on the 9 July when the Agents, Earle and Hodgson, write to his Lordship in a tone even more respectful than usual, which is not surprising given the content of the letter.

To listen to the audio clip, click play on the bar below the letter on the right.

‘My Lord,
Leghorn 9 July 1781
We enclose your Lordship the Account Current of The Tartar Privateer, Captain Thomas White. After her return from the last Cruise, she had the misfortune to run on shore on the road and received so much damage that it would have cost an immense sum to have her fitted out again. It was therefore thought advisable to dispose of her by public sale, which was accordingly done, but having thrown her guns overboard, and not being at all adapted for a Cruiser, she of course sold for very little and indeed barely sufficient to pay the charges as your Lordship will see by the abovementioned account for the balance of which your Lordship has credit in £2.2s.6d. This will be a total loss to the concerne’d, but we must have patience as no Privateer had ever a better opportunity of doing well, and it has not been for want of attention that Captain White was not successful.

With best respect to Lady Cowper we subscribe ourselves with all due respect
My Lord, Your Lordship’s most obedient and Humble Servants’ Earle and Hodgson
[HALS Ref: D/EP F343/9]

The second voyage of ‘The Tartar’ alone had cost Earl Cowper (in today’s money) over £31,000; out of this he was left with just £133.56. Even though he was extremely wealthy, it is safe to suppose he was not best pleased. However there was further bad news to come.

The Island of Minorca, held by the British since 1761, when it was exchanged by treaty for Bel Ile, was by this time proving to be a thorn in the side of both France and Spain. The port of Mahon was home to a growing number of privateers, and so in late 1781 it was attacked and, after a long siege, was finally captured in 1782.

The ‘Earl Cowper’ was registered in Mahon, which made it the vessel’s home port, so it is not surprising that the ship was there at the time of the siege. The next news we hear is much later, in November 1784.

‘My Lord, I have lately heard from the person in Minorca who covered the last remains of our Earl Cowper when that place fell, and who recovered near £1200 sterling from the Court of Spain on that amount. He writes me that he hopes very soon to be able to settle this [amount], but does not enlarge on the subject as it is not only loss of property, but I believe the covering of any property that was made Capital on the taking of the place. I shall only add that I shall be happy to transmit to your Lordship which ever your proportion is that comes to my hand.’  George Forbes, Kensington, 18 Nov 1784
[HALS Ref: D/EP/F310/46/9A]

Originally the Earl’s investment may have been intended to provide excitement and diversion, as well as providing some extra money. Instead he found himself out of pocket and probably out of humour. Privateers, he must have concluded, were a risky proposition.