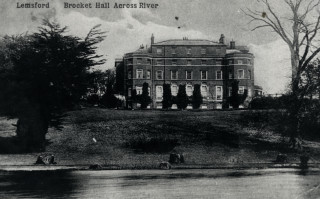 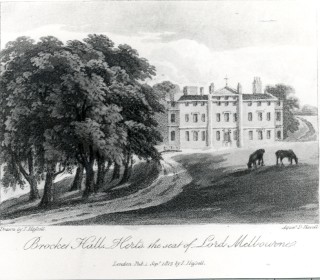 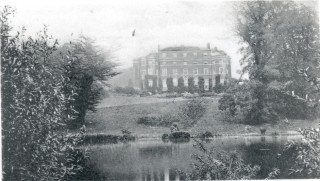 On 25th November 1848, tragedy fell on Brocket Hall (near Hatfield) when ex-prime minister William Lamb, Viscount Melbourne died of dyspepsia (indegestion). Six weeks beforehand the Viscount was taken unwell and despite the best efforts of Dr Holland (a London practitioner) and after a number of relapses and brief recoveries, Melbourne eventually succumbed to his affliction at a quarter past six on Friday evening.

William Lamb, the second Lord Melbourne and Viscount Melbourne was born on the 15th March 1779 in London. He studied at Trinity College, Cambridge and in Glasgow. For a time he entertained the idea of joining the legal profession, but instead became the Whig MP for Leominster in 1805. The year before, he married Lady Caroline Ponsonby, but this proved to be an unhappy marrige and she famously had an affair with Lord Byron in 1812. She later died in 1828.

From entering parliament, Melbourne used his political talents to climp up the ranks of the Whig party and by 1830 he became Home Secretary in the Whig government under Lord Gray. In 1834, after the shocking resignation of Lord Gray, Melbourne (the person most likely to hold the Whig government together) was appointed Prime Minister by King William IV. After the next general election and despite the opposition of the traditionally anti-whig King, Melbourne once again became Prime Minister in 1835 and stayed in office until 1841. His term as Prime Minister was characterized by his hallmark of finding the middle-ground, and during his term he instructed the young Queen Victoria in politics.

In private he was well-known for being honest, straightforward and generous, and he has made a substantial impact on our political history and he will be surely missed by everyone at Brocket Hall. ‘Lord Melbourne leaves behind him the memory of one of those whom the genius of British history will love to remember’, he will not be fogotten.