Sarah Churchill and her Finances

The business letters of the Duchess of Marlborough 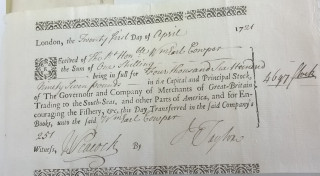 A certficate for shares in the South Sea Company

Sarah Churchill, as well as being an enthusiastic, if background, politician was a very sharp business woman.  One only needs to look at her will to see how much money and property she left to her descendants to demonstrate this. Admittedly she was left a goodly estate by her equally money savvy husband but she had her own bank accounts and managed her own finances. The Duke, who died in 1722, left an estate of about £1,000,000, managed after his death by trustees, which included his wife. By the time she followed him in 1744 she had increased this to a fortune calculated at a capital value of £4 million with an annual rent roll of £17,000 from her twenty-seven landed estates in twelve counties.  This was topped up with £12,500 in annuities.[1] In fact Sarah was the largest single account holder in the Bank of England (£166,855).[2]

Sarah took an active part in managing her money which was not as unusual as one might think.  Many single and widowed women took advantage of the professionalization of the loan ‘industry’ making interest-bearing loans to a variety of borrowers, and by 1720 they had become a significant proportion of the investing community.[3]   It was also true that married women could keep their profits from dabbling in the stock market as one aristocratic lady advised another:

Whatever money you receive from that stock with interest due upon it will be a debt due to yourself, to be kept for your use, & not to be looked upon as any part of your fortune to [your husand] . . . kept a part by itself, & for yourself to dispose of as you shall judge best.[4]

Sarah Churchill’s mastery of finance was entirely unschooled. One contemporary commented that when she watched her in the “curious process of casting up her accounts” despite being “well versed … in all matters relating to money … knew nothing of common arithmetic … To lookers-on it appeared as if a child had scribbled over the paper, setting down figures here and there at random; and yet every sum came right to a fraction at last.”[5]

Another anecdote which demonstrates the Duchess’s involvement in the world of finance and business and her wealth revolves around the competition between the Bank of England (then a lending institution) and other banks.  The Bank apparently tried to engineer a run on Childs bank in order to ruin it.  In panic Childs turned to Sarah to bail them out.  She came up trumps by running round all her friends to collect up sufficient gold to the tune of £700,000.[6] With accounts in both banks, it seems she was careful to spread her wealth around.

When she and her husband went into voluntary exile delayed her departure in order to manage their finances. They had to leave their money in the hands of people they trusted such as Lord Cowper and her son-in-law, Lord Sunderland as signatories. Documents in the HALS collection relate to this anxious time.  One particularly pertinent piece is a confirmation from Lord Cowper that he will

manage for her best profit by putting the same out at interest either at real securities the likes whereof  shall be approved by two of the most eminent judges or on the best and safest of the government security as her Grace by a writing bearing even date att this shall direct and pay.[7]

It is notable that Cowper is acting on behalf of the Duchess rather than her husband. (The sum we are looking at is a very healthy twenty seven thousand pounds, worth some £2,000,000 today).

She was also well aware that there were pitfalls in using ‘financial advisors’. When the banks allowed customers to use an agent, it appears she used  the highly suspect London merchant, Matthew Wymondesold (c. 1687–1757).  He had a dubious reputation evidenced by his being called up to face a House of Commons committee on a purchase of £20,000 worth of South Sea Company stock at 40% under the market rate for the Chancellor of the Exchequer. The Chancellor profited by re-selling them at a very decent price.[8]  It is hardly surprising that Sarah is frustrated at her agent’s shifty attitude towards her money.

She clearly had a good understanding of money matters and the interaction of politics and the economy. She could advise on the advisability of investing in land and the South Sea Company’s long term viability (although she was one of the few people who made money out of the exercise).The following letters illustrate this instinctive shrewdness, despite her unconventional accounting methods. and also illustrate her .

[2] Isaac Kramnick, Bolingbroke and His Circle: The Politics of Nostalgia in the Age of Walpole, p.42

[3] A Laurence, Women, banks and the securities market in early eighteenth-century England

[4] Duchess of Chandos to Lady Cassandra Molyneux, October 8, 1724, in O’Day ed., Life and Letters, no. 184. Quoted in “Legitimate commerce” in the Eighteenth Century

[5] The letters and works of Lady Mary Wortley Montagu, p.74

[6] Frederick George Hilton Price, Temple bar, or, Some account of ‘ye Marygold’, no.1, Fleet street.  According to the National Archives currency converter this is equivalent to an eye watering £53,613,000. Even if we knock a couple of noughts off it is an extraordinary sum to be able to collect in a short time.