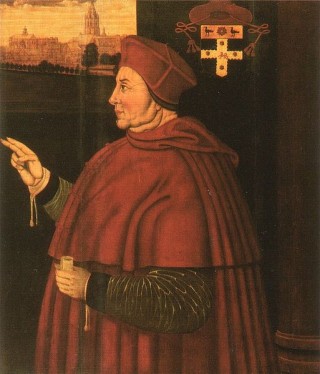 An Important Political and Religious Figure

One of many dignitaries and noteworthy people to have lived in the Parish of Cheshunt, Thomas Wolsey was born in Ipswich, Suffolk in around 1473 and came from relatively humble beginnings.  During his lifetime he rose to become an important political and religious figure and was prominent in the court of King Henry VIII.

In 1515 he was awarded the position of Lord Chancellor – the King’s Chief Advisor – and he played a significant role in many foreign policy decisions during his career.  Also an important religious figure within the Roman Catholic Church in England, Wolsey became Archbishop of York, the second most important seat in England and was made Cardinal by Pope Leo X in 1515.

As a measure of his appreciation for his loyalty and service King Henry bestowed many honours and gifts upon the Cardinal, one of which was Cheshunt Great House which the King had built for him.  Wolsey took ownership in around 1519.  The Great House burned down in 1965 and now only a small portion of it remains, this is situated in the grounds of Peace Close.

The Catholic mandate of celibacy among its clergy was not widely practiced amongst the English priesthood at the time and Wolsey had a long-term relationship with a woman named Joan Larke who bore him two children – a boy named Thomas and a girl named Dorothy.  The children were separated, sent to live with and were raised by different families.  However, both survived and went on to have children of their own.  Wolsey’s mistress meanwhile became something of an embarrassment and the Cardinal arranged a marriage for her to George Legh in around 1519, for which he even paid the dowry.

Wolsey’s fall from power came as a result of his inability to secure an annulment of the King’s marriage to Catherine of Aragon so that he could marry the young Anne Boleyn.  This ultimately led to Henry’s decision to break away from Rome and form the Church of England, of which he became the Head.

Having incurred his displeasure the King stripped Wolsey of his position in Government and of his property.  He was allowed to remain Archbishop of York to whence he retreated – rather ironically it was his first visit to the City.  Only a short time later Wolsey was accused of treason and was ordered to return to London.  En-route back to the capital he fell ill and died at Leicester.  Having pre-arranged his own lavish tomb at Windsor in the form of a beautiful black sarcophagus (which has since been used to house the remains of Lord Nelson in the crypt of St Paul’s Cathedral), he was buried in Leicester Abbey (now Abbey Park) without a monument.