Voting for the Earl of Salisbury in Cromwell's Parliament 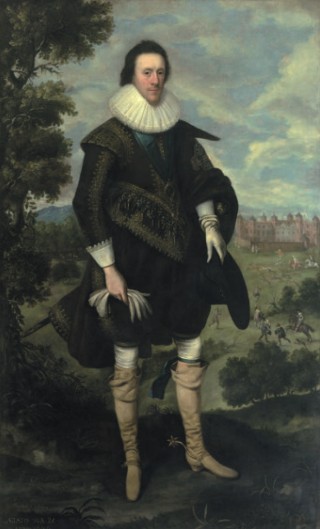 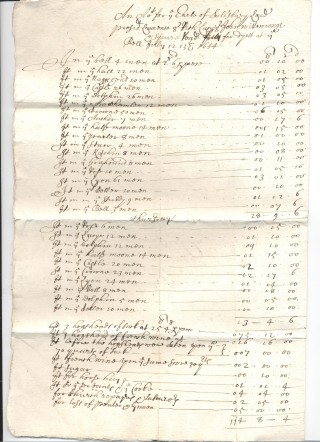 Buried in the Delmé-Radcliffe archive in Hertfordshire Records Office is a curious set of expenses.  They detail the money laid out for William Cecil, the Earl of Salisbury in his quest for election to one of the two Hertfordshire parliamentary seats in 1654.[1] This Parliament called while England was under Cromwell’s rule, later became known as the First Protectorate Parliament.  Unlike later elections the extravagant outlay was not in the form of bribes, but for hospitality. The motivation to get elected was not for pecuniary gain but for the prestige of being an MP.  And as we shall see this expenditure was on a grand scale. I have converted the seventeenth century sums into modern values using the National Archives Currency Converter in order to make them easier to appreciate. [2] The original sums are in footnotes.

In 1653 Cromwell ended the ‘Rump’ parliament. This had been left over from Charles I’s reign after the Long Parliament had been purged of members hostile to putting the King on trial for high treason. Soon after this Cromwell’s first parliament was called, identified now as the First Protectorate Parliament.

William Cecil, Earl of Salisbury and the 1654 election

The major influence on the Hertfordshire county seat for this election was the Cecil family, the Earls of Salisbury of Hatfield House.  And for the purposes of ensuring they retained this seat they were generous in their patronage.  For a previous election (probably 1624) they “spared no efforts at the election and as a result was faced with a bill for £33,800[3] providing sustenance for 972 friends and supporters.”[4] William Cecil, earl of Salisbury decided to stand for the seat in 1654. He had already been an MP twice in other constituencies before going for election in his home county.  Dismissed by his contemporaries as ‘a man of no words, except in hunting and hawking, in which he only knew how to behave himself’ he had nevertheless held several official positions prior to becoming the MP for Hertfordshire.[5] He was certainly not as politically astute as his father or grandfather, both major advisors to Elizabeth I and James I respectively, but he was certainly active. He sided with parliament in the English Civil Wars and as the scion of the major county family he was the leading candidate for the seat. Despite this, Cecil had very little influence during Cromwell’s First and Second Protectorate Parliaments.   In fact he was prevented from taking his seat in the second parliament despite having won the election.

However, he was certainly keen to win the county seat and the efforts he made in the first of Cromwell’s election were markedly vigorous.  It is noticeable that the calendar of the Cecil papers contains twenty-one letters sent out as directives to the freeholders in Hertfordshire to vote for him as part of his campaign.  This was of course in addition to the considerable sums he spent in hospitality.

The Hertfordshire archives contain four sheets of paper with details of the expenditure which Cecil seems to have shared with his fellow candidates, including Sir John Wittewronge of Rothamsted. The outlay falls into various categories including lodging expenses for a staggering 393 men.  Although it is not clear who these men are it seems likely (given the estimated electorate totals approximately 240)[6] that they are freeholders brought in for the day to cast their vote and various retainers.  The cost of this accommodation was £3,532.43 between 15 inns.[7]  No doubt this made Cecil very popular with the local landlords.

It was, of course, important to keep voters happy and this was achieved in the seventeenth century by keeping the alcohol levels up.  In what might be termed the 1654 version of market segmentation it was equally important to cater for all tastes. Thus we have a bill for a variety of drinks, including three hogsheads[8] of sack[9]  at a cool £5,712.34.[10] Sack was clearly not for everyone as the manuscript also notes an assortment of wine which looks as though it was of variable quality, presumably depending on who it was intended for.  So there was a hogshead of French wine at £1,269.41.[11] Good French wine cost a further £151.12 [12]and what might have been a less special 21 barrels cost £1,586.76.[13]  For those who appreciated quantity as opposed to quality there were eight barrels of wine which cost a mere £5.67 per barrel.[14]  The total wine bill was an impressive (or extravagant) £7,510.66.[15]  For those wishing to stick to good ale twenty-one barrels of beer were provided, setting the candidates back £1,586.76.[16]  This was clearly insufficient as a further four barrels at £272 was required.[17]

There was not the modern stigma attached to smoking in the seventeenth century (despite James I’s attack on the weed) so for the further comfort of his voters, Cecil provided tobacco at £302.24.[18]  Ready-made cigarettes were unheard of so disposable clay pipes were required and this set his Lordship back a modest £34.00.[19] They also had to feed these voters (and of course the retainers).  Bread cost the Earl and his colleagues £340.02.[20]  Sugar was purchased at £37.78.[21]  On top of this they paid for 136 meals. This set them back £706.40. [22]  The voters were obviously still hungry because further down in the accounts there was a bill for an extra £317.35. [23]

The  whole bill comes to around £36,000.[28]    Cecil’s running mate, Sir John Wittewronge of Rothamsted appears to have contributed £4,054.42.[29]  Given that we have estimated the electorate in 1624 as 240, this means that Cecil spent the equivalent of £150 on each individual voter.  Translate this into a campaign for, say, modern St Albans and it would cost the candidate over eight million pounds to spend the same amount on each of their potential constituents.

Would that be enough to persuade you?

[4] Lawrence Stone The Electoral Influence of the second Earl of Salisbury, I614-

[5] Clarendon, Hist. of the Rebellion