Hitchin Priory before the Radcliffes 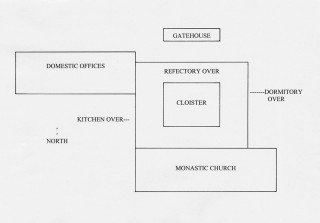 The layout of the original friary buildings

In 1317 King Edward II granted a messuage in Hitchin to the Carmelite Friars.  The friary that they built there consisted of a gatehouse, domestic offices, cloister with kitchen and dormitory over, and a church dedicated to the Blessed Virgin Mary.

In September 1530, only a short time before his break with Rome, Henry VIII gave the Hitchin friars a gift of 40 shillings. In May 1534 the Prior John Butler took the oath recognising the Royal Supremacy and on 17 October 1538, he and 4 friars surrendered to Sir William Coffyn and Henry Crowche, the King’s Commissioners.

Thomas Parrys subsequently acted as bailiff for the Crown – the plate and ornaments were sold, the bells, lead, glass, tile and stone were stripped and the steeple knocked down – the desecrated site became a quarry for the townspeople.  A survey now held at The National Archives at Kew declared that ‘all the buildings were sore decayed and very ruinous both in timber and tile for lack of reparations’.

Subsequently the site and what remained were sold to Sir Edward Watson and Henry Herdson for £1,541. Nothing more is known for sure about what happened until they sold the property to Ralph Radcliffe in 1553.