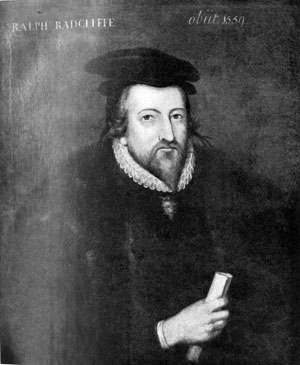 Ralph Radcliffe was the first Radcliffe to live in Hitchin. He came from a Lancashire family – his cousin was Robert Radcliffe, Earl of Sussex – so he had court connections. He was a scholar of Brasenose College, Oxford, and Jesus College, Cambridge, obtaining an MA in 1539. As well as converting the Friary into a house it is known that he founded a school there and the 17th century Oxford antiquary Anthony Wood wrote that – ‘his school was in great renown, he grew rich and was held in much veneration in the neighbourhood’.

Ralph Radcliffe and his wife Elizabeth had three sons, Ralph, Jeremy and Edward. After a prosperous life, Ralph Radcliffe died in 1559 aged 40. At their father’s death Ralph, the eldest was still only 16, Jeremy’s age was uncertain and the youngest, Edward, was aged 6.

Ralph Radcliffe had made his will the previous year during the last year of the reign of Queen Mary Tudor and it is very much in the Catholic tradition. The collection at Hertfordshire Archives includes a 17th cent copy of the will which had originally been proved in the Prerogative Court of Canterbury – in itself an indication of his standing at his death, as only the more wealthy families with property in more than one diocese took their wills to be proved there.