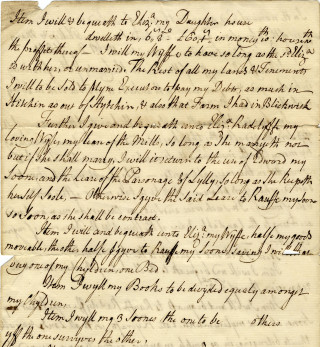 Extract from the will of Ralph Radcliffe
Hertfordshire Archives and Local Studies, Reference DE/R F2

Ralph Radcliffe was the eldest son of the first Ralph Radcliffe at Hitchin Priory and his wife Elizabeth, and was brother to Jeremy and Edward Radcliffe. He was only 16 when his father died, so he had to grow up quickly. He lived throughout the reigns of Elizabeth I and James I, through all the turbulent changes to the Church of England.  He was a lawyer at the Inner Temple and may have lived mostly in London.

He died in 1621 aged 78. His will is very different in character to his father’s – he commits his soul into the hands of God ‘believing by the only death and passion of His dear Son my Lord and only Saviour Jesus Christ to receive and have full and free remission and pardon of all my innumerable sins’.  He is to be buried in Hitchin Church ‘without any vainglorious extraordinary charges and expence’.

Some of the bequests in his will were: To his godson Ralph Skynner the younger (possibly an ancestor of the John Skynner who founded the Hitchin almshouses in 1666) – 20 shillings ; To his faithful servant John Daye, bailiff of the manor of Maydencroft - 20 shillings ; To ‘Old’ servant Elizabeth Rayment – 10 shillings and all other servants 6s 8d each ; Four acres of arable land – yearly rent to be used for the relief of the aged and impotent people of Hitchin and binding poor fatherless children as apprentices (he says his wife asked him to do this before his death). Plus £40 for the poor of Hitchin generally.