The Keeper and the Queen 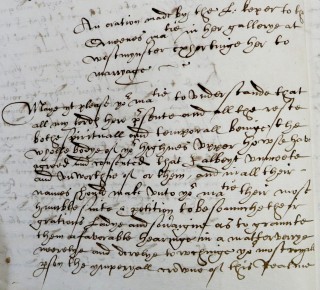 A speech to the Queen
Hertfordshire Archives

The speech which follows must have been very tricky to present: on the one hand there was the need to make clear the danger of leaving the kingdom without an heir; on the other hand Bacon had to be careful not to offend. In other words he had to be diplomatic and balance firmness with sycophancy.

Given that the Queen’s reaction to the subject of marriage was never going to be especially favourable the introduction is fairly cautious. The Lord Keeper goes on to remind her of the uncertainties of life and that, should the Queen die, no successor has been named. This leads inevitably to the subject of the Queen’s marriage.

The second part deals with the duty of Parliament to God and the Crown to point out the danger to the kingdom of not having an heir to the throne and that Elizabeth’s marriage would bring peace of mind to all and that motherhood would bring delight to her personally.

A third part deals with the possibility of another war and the shedding of innocent blood if the succession were to be disputed, and also points out that there are no real barriers to her marrying who she chooses.

Finally, and not surprisingly, the speech closes in a conciliatory tone with a reminder that he is speaking on behalf of Parliament and with the best of motives, but requests that if he has given any unintended offence it can be overlooked.

May it please your majesty to understand that all my lords here present and all the rest both spiritual and temporal being the whole body of your highness upper house have agreed and consented that I, albeit unmeete and unworthy of them, and in all their names, should make unto your majesty their most humble a petition to be so much their gracious Lady and sovereign as to grant them a favourable hearing in a matter very nearly and dearly touching your most royal person, the imperial crown of this realm and the universal weal of the same and therin themselves also and all other your highness loving subjects, every one from the highest to the lowest and their whole posterities and [siquells]. Nevertheless always and altogether humbling and submitting the whole that I shall say to your highness consideration and correction. And here I have thought meet because your highness should the better understand the ov[er]all discourse of this matter.

First to open the occasion of this suite, then how diversely my lords think themselves bound to make it and lastly what their opinions, counsels and desires be concerning the matter contained in it.

For the first the occasion grew upon the reading of a bill exhibited last Wednesday before my lords concerning the succession of the crown of this Realm. Upon the well weighing and considering whereof it evidently appeared unto them that neither by that bill nor by any other act already made, any open or certain declaration or limitation is made to whom the Crown should remain if God should call your highness without heir of body, which our Lord forbid. And here calling to their remembrance that the only means to have an heir to the great and unspeakable comfort and joy of all your subjects is the honourable state of matrimony first instituted by God as your highness knoweth in a most pure place, then commended and honoured by his son here on earth with the first fruits of his miracles known and ever since the beginning by his providence [certain word] as the chief and most necessary cause of our being now and of all those that have been or hereafter shall be. My Lords I say remembering this, and thought also that all princes be they never so great, never so young and like to live, be yet mortal subject every day yea every hour to God’s call. And lastly considering in what miserable estate and condition if God should so call this Realm and all the members thereof should stand, and to what a marvellous and imminent dangers, perils and mischiefs it should be subject, they had most just occasions to become humble petitioners to your majesty for the help thereof.

For the second part they think themselves so bound to make this petition that without offence to God, to your majesty and to their country it could not be pretermmitted [omitted]. First to God for that it cannot be that a man should keep his oath and homage made to your highness and crown in so weighty a cause as this is to be forgetful or [neglect] the contents thereof. And what an offence that is to God it is easy to Judge. For the offence to your majesty every subject or liege man without exception knowing any peril or danger to the crown or state or any parte thereof, and not revealing or counselling his liege lady and sovereign  therein of some such of her highness ministers to whom he may have access without doubt offendeth your majesty in the duty of his allegiance as it is evident in particular offences touching the crown. And if so how much more in this universal matter.

Now for the offence of his country, how can a man knowing his country to be toward peril and danger and not seeking all the ways he may by foresight prevent and withstand them, but must be thought greatly to offend his country. And thus I trust it appeareth unto your majesty that upon just occasion and great duty bound I am now to open to your highness the wishes desires and counsels of all my lords here present. The effect whereof briefly and summarily to speak consystethe in this, that it might please your majesty to dispose yourself to marry where ye will, with whom ye will and as shortly as ye will, as the most honourable, present and sure means and ways to increase comfort to your self, to avoid all manner of danger and peril that may happen to the crown and to the common wealth of this realm for your self. How can it be possible but that your will must bring and breed to your highness person increase of comfort, quietness and delight, three of the chief worldly jewels pertaining to life. Now to bring in causes for [prose] hereof I leave as vain matter being so evident and apparent of it self. Only one comfort I would put your majesty in mind of and that is if your highness could imagine or conceive the comfort, surety and delight that should happen to your self by beholding an [impe] of your own that should in time to come by your grace inherit and enjoy the imperial crown of the realm to the great rejoicing of all your loving subjects. It would I am assured sufficiently satisfy to remedy all manner of letts impediments or scruples if there be any that might hinder this their desire.

Now for the state universal weale of this realm can any way be used so sure and certain of avoiding of all danger concerning the same as to devise that which every member thereof doth heartily wish and [continue all ye] praye[r]s. For very certain and true it is that well nye all dangers and troubles in times past have risen of changes of states, have ever taken their foundations of uncertainties and doubts of titles that either have been in deed of else have been imagined to be. And therefore I may most assuredly conclude that, that which is the most certain remedy to remove the occasion of such more certainties and doubts must of necessity be allowed in reason to be the greatest defence against all such dangers and perils and the most sure stay that can be devised for the common weale. And is there any thing that can bring that so perfectly, so safely so shortly to pass as this the fearful slaughters, the pitifull effusion of blood, the miserable spoils that have so often happened by the of [un]certainties of titles to crowns be more lamentable to be thought on then needful to be by me spoken of, considering they be as they in deed so. But [any] like your highness if the [examples] be both many and true that for increase of amity only divers marriages of princes have bin made within the degrees prohibited to all other persons and, some times to religions, yea some time contrary to solemn vows otherwise afore made, what then ought the dangers before remembered imminent to a realm, move a prince of the same realm to do in a cause no way prohibited but every way honourable and commendable and profitable, and whereas the gifts of nature, fortune and doe concur to the furtherance thereof. But here forgetting my self and fearing I should be troublesome to your majesty in a matter that I trust God hath already or now presently doth or shortly will incline your highness heart [unto] that few words might serve. I leave any further on my Lords behalf to move your highness submitting and committing the whole that I have said to you highness con[sideration]

And here for my parte I most humbly beseech your majesty that if any thing in this my declaration have passed me indiscreetly or uncomely done that your highness will be so much my gracious lady as not to impute it to me afterwards, then for want of understanding in so weighty a cause and likewise I desire my Lords that if any thing hath been [permitted] me agreed to be said or anything added that I had not commandment to speak that they will presently help me out with their declarations and on the other side if I performed my command that they would so affirm it