An Introduction to Servants 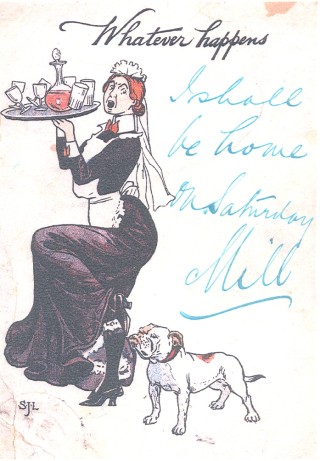 A postcard sent in 1905, "I shall be home on Saturday Mill"
Hertfordshire Archives and Local Studies

Domestic servants formed on of the largest occupation groupings during the 18th and 19th centuried, particularly for women. It had developed from the large, mostly male, households, which had been the preserve of the medieval nobility. By 1851 there were over one million servants in Britain making it the largest occupation after agricultural work.

As soon as the family’s income would allow, a teenage girl was engaged to undertake menial chores, even if it caused financial hardship. A life in service was the only job open to many people and those who began very young were conditioned to accept it as a natural lifestyle.

A servant had to obey all his or her master’s commands, as long as they were not contrary to the laws of God of his servant’s lives, including their free time, how, or the state. A master, like a father, was entitled to control all areas and with whom they spent it.

“All my sisters went into service… got no choice… there wasn’t room for these women to be at home.”

1,386,167 women were registered as domestic servants in the 1891 census for England and Wales.

There were good reasons to enter domestic service; it was safe, there was plenty of demand and it was not subject to seasonal variations. Poor families sent their elder children to service to relieve pressure on the family.

These pages formed an exhibition developed by staff at Hertfordshire Archives and Local Studies.