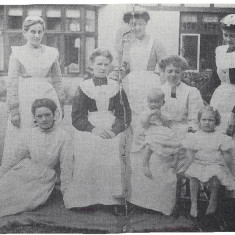 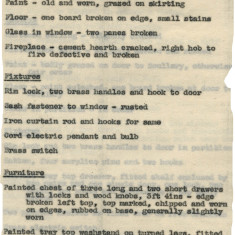 Record of condition of decoration, fixtures and furnishings in servants' rooms at Panshanger, near Hertford, 1940. The house was to be used for evacuees.
Hertfordshire Archives and Local Studies, Ref: D/EP E4/3 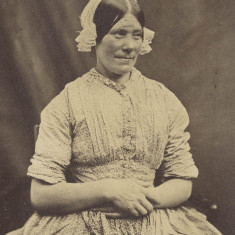 A servant of the Claridges, 1850s
Hertfordshire Archives and Local Studies, Ref: D/Ebi 54 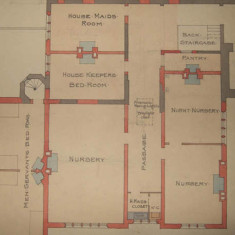 19th century plans of Gilston Park show the servants' bedroom strategically placed next to the nursery and well away from the parents.
Hertfordshire Archives and Local Studies, Ref: D/EBo P7 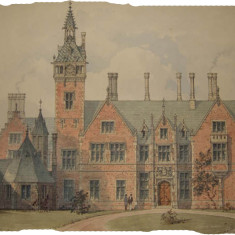 A servant of the Claridges, (who lived in Berkhamsted) c. 1855
Hertfordshire Archives and Local Studies, Ref: D/EBi 54 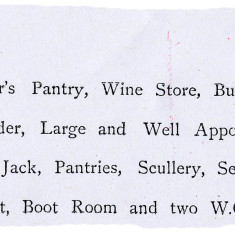 “I have known it so cold in the servants’ bedroom that their false teeth were frozen solid in a glass of water”.

Before the late 17th century, servants dined, slept and worked in the main part of the house, sleeping wherever space was available such as in the kitchen or in cupboards under the stairs. Only the very grandest houses had distinct areas and much later in the 18th centuries, servants’ quarters were purpose built. Often attics were used as bedroom and in the absence of electric or gas lighting they were cold, damp and dimly lit.

(from a household manual)

In a household manual of 1870, employers were instructed to keep a servant’s bedroom as sparsely furnished as possible as should include “a small wooden bed, a wooden ladder-back chair and a simple basic washstand”. The working day was so long that the only time they spent in their rooms was when they slept. The majority of lower servants had to share a room.

In the 18th century, servants were summoned by a hand-bell but by the 19th century, the invention of the bell pull meant they could be summoned from greater distances. From this time, it was fashionable for servants to be as invisible as possible. The design of larger houses concealed their existence on the outside with small entrances at the back of the house and inside through hidden corridors and stairs.